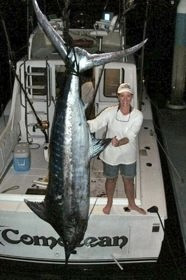 A quick report from Ben from this year’s GCGFC Heavy Tackle Tournament held over the weekend:The Cabo Yachts & Bruce Lynton Prestige Automotive Blue Marlin Classic was relocated to the Runaway Bay Marina with great success — despite the weather which left many of the smaller boats in the fleet at the marina on Day 1.

On Day 1, Katie Ripper on Castille III quickly put points on the board with the first blue marlin tagged, followed by Richard Fletcher on Num Nuts, Barry Alty on Mistress and Carmen McCloy on Caboom.

Day 2 Castille III and Mistress added another each bringing them in first and second for the competition from the crew on Num Nuts who disqualified their fish, the first fish of Day 2 as it had become entangled in another line. Ocean Dream weighed a monster yellow fin tuna that tipped the scales at 44kg winning Eric Carruthers the heaviest other species trophy. There were also some other gamefish tipped the scales nicely at weigh in, including a 26kg dolphin fish for David Thompson on Num Nuts.And outside the competition, Perry sent me this picture of Vanessa and her pending Queensland record caught on Sunday and weighing in at 148kg on board Comocean. Congrats to Vanessa, Perry and Wombat!