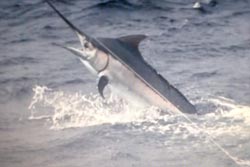 From Cairns heavy tackle, Capt. Adam and Iona 2 have been heading up the Ribbons in not too favourable weather. Even still they managed to release two yesterday on Number 10 Ribbon Reef at 300 and 150lbs (picture). Its a really good sign for the season ahead, the fish being around so early.

From Townsville light tackle, today was Day 1 of the Mike Carney Toyota Billfish Challenge.  Unfortunately, the quiet we experienced before the tournament has continued through the start. Not a single black marlin was seen although two sailfish were tagged and released from amongst the 30 boat fleet.

On board Screamer, Pemberton Jnr (Lindsay) tagged the first billfish of the tournament just after 1pm.  At 2, the team on board Elektrakushen put a tag in a sail that angler Brad Kane had been fighting for two hours on the 6kg line.  These were not the only seen.  On board Castille III, Capt. Deano raised a pod of sails for a double hookup which unfortunately turned to a double jump off soon after.  And there were a few more reports of fish lost around that same time including Burgundy Lady who had a couple of bites that couldn’t be converted.