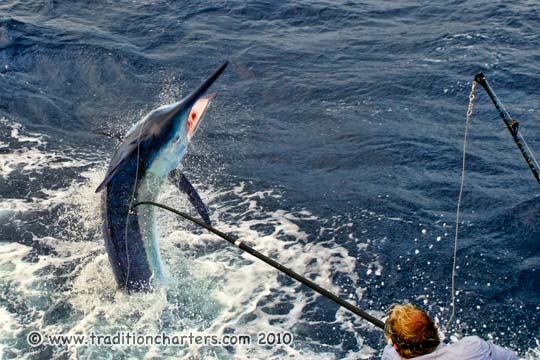 Just a catch up report from Wednesday.  On Amokura it was owner Steve’s turn on the rod Wednesday and with fellow Lake Macqurian Mark “Griffo” Griffiths on the wheel releasing a nice 750lb-er eventually going two from four for the day.

I also heard from Barry Wiseman who wanted to share a report from his trip with Hayden Bell on Release the week before.  Barry says that despite the 30 knot winds, he had a great 5 days releasing 4 fish to 350lb on Number 7 Ribbon Reef and 3 more at the top of 4 and 5. Thanks Barry!

We made a detour into Lizard Island yesterday — its good to be back at the rock enjoying best anchorage we’ve had all week overnight.  We’ll collect our guests from the lodge this morning and start fishing out of the northern end for something different.