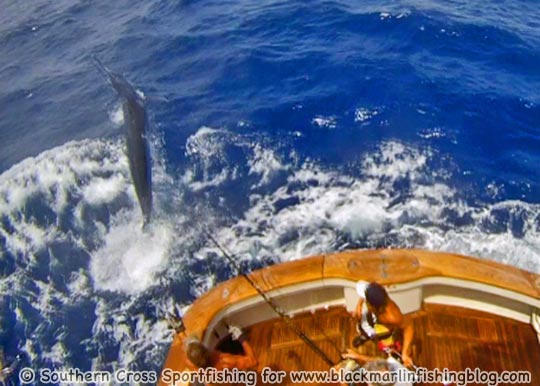 Shaka’s Captain Jared Weir is on the downhill run, winding up his season on the reef later this week.  But he’s already finishing on a high for owner/angler John releasing their second grander black marlin of the season yesterday. Captain Jared said they were on the spot quite early and released the fish just around one o’clock before most of the fleet had arrived.  John sent through this video still (main picture above) – thanks John and congratulations!

On KEKOA, we had a great morning bait fishing yesterday on the way out from Cairns and even I had a turn on the rod bringing in a rainbow runner from the spinning rod upstairs on the flybridge.  This turned out to be our lucky Rodney, snaring a frisky 350lb-er in the afternoon for Graeme which gave an under-the-weather Dingo a hard time on the leader (thumbnails above).

A catch up report also from Cool Runnings who have been out this week releasing a 450lb-er on Wednesday and a 250lb-er on Friday for Port Stephens angler Brad Pretti.