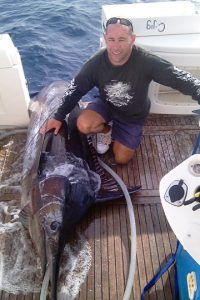 You may have seen this one on the facebook page last night, but yet another great report from Capt. Tim Dean on Calypso at Port Stephens yesterday where the fishing is still firing.

He released 9 marlin, 8 striped marlin and one black marlin for his novice anglers. Tim quipped that his anglers “have never done that before…..and now they have!” It would have to be on any marlin anglers wish-list to fish a red hot day off Port Stephens! Flying Fisher added another 4 to their season tally as well.

I also heard from Grant Thompson on Cjig who fished Tweed Canyons off the Gold Coast yesterday.  Grant says they went 1 from 2 blue marlin, with this fella released successfully after a spot of resuscitation via deck hose.

The weather looks downright ordinary in both areas for the weekend so we might have to wait until next week to find out if the bites continue.