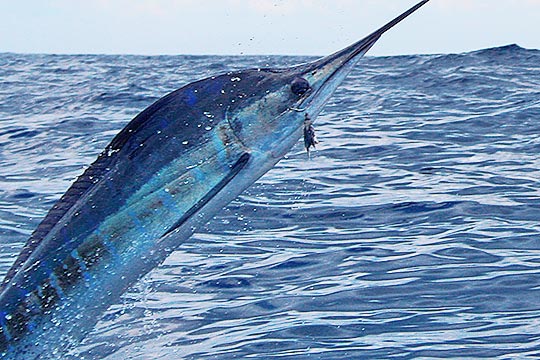 Some marlin fishing reports from the weekend on the southern NSW coast:

The Tollgate Classic is over for another year. The weather was kind and there were a few fish around to be caught for the 50 odd boats entered (though the marlin fishing over the tournament was slower than recent years overall). Travis, on deck of BBGAC president Dennis Lucardie’s boat Hardaraddit, tells me they took out the tournament with 7 striped marlin tags as well as Champion Angler for Brian Schofield and Champion Female for Denis’ daughter Tegan.

Young Brock Lazzaro from Bermagui fished on Mr Hooker and took out Champion Junior Angler with 2 striped marlin tagged. Most fish were caught south around the Tuross Canyons which should be good for the Bermagui Bluewater Classic this weekend.

Onsite weighed a 256kg blue marlin on the Saturday and a few boats finished the tournament with two marlin tags. Travis says another Bermagui boat Panlicker had a shot at the runner-up trophy but failed to hand in their third tag card on the last day.

I also heard the smallfry and junior anglers had a great time and were very competitive tagging their striped tuna and received compliments on their radio skill from the sked master!   Thanks to Travis and Gail for the reports!

Read on after the jump for the full results.

Fishing with Capt. Ian “Wobbles” Ford on Hot Shot, Dave tells me they had a good weekend with an estimated 80kg striped marlin for Sharon Garbutt on 10kg, as well as a 75kg striped marlin for 13 year-old Michael on 8kg.  With Wobbles at the wheel and Dave on the deck, 11 year-old Tyler Wright also caught his first marlin at 66.8kg on 15.

The Bermagui Bluewater Classic is this weekend.