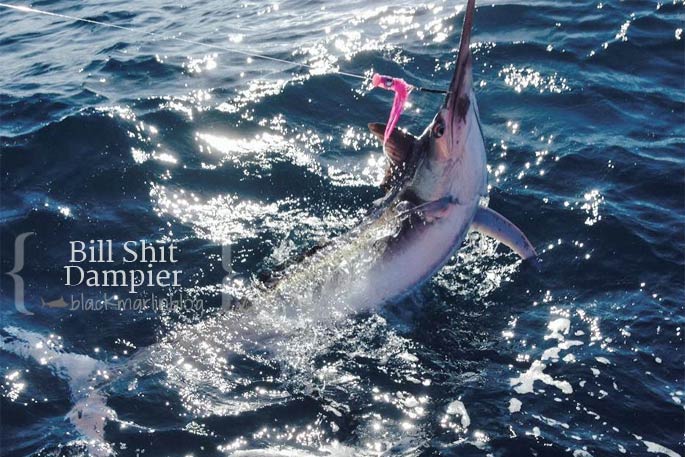 A report from Rob Telfer at Karratha that came via Black Snack’s Mitchell Calcutt. Rob fished a half day Saturday off Dampier on board Bill Shit and went 4 from 6 on blacks 40-50kg range, with the Black Snacks Hot Lips doing the damage. Rob reports that the fishing has been hot and cold lately with some boats having upwards of 10 shots one day and working hard the next to find a fish. Photo above.

Yesterday though, it was a day of finding the fish for Blue Lightning‘s Capt. Chad Mills. With guests from South Australia on board fishing off the Montebello Islands / Dampier for the trip, they fished for the billies yesterday ending with an amazing tally of 44-35-26 sailfish.  While the guests were actually just looking forward to the chance to catch their first billfish each, they ended up with 4-5 a piece! Chad’s best day off Dampier on the sails (and blacks) was 31 last year and they gave it a good nudge again this time (that tally was 13 marlin and 18 sailfish).

With the King Bay GFC hosting a trial billfish competition this weekend (to see if the fishing is good enough to make it an annual event), hopefully the action continues through! 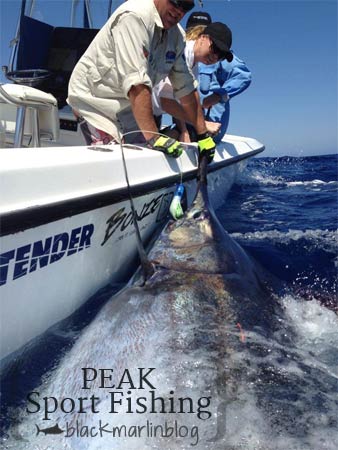 Peak Sportfishing’s Eddy Lawler a big blue marlin make up his 2-2-2 blue marlin on Tuesday that was right up there in the very large category.  As you’ve read on these pages Eddy’s had some really hot fishing lately which is pretty typical of Exmouth at this time of year. But blues of this quality make the rest of the country stand up and take notice (as if they weren’t already doing so). With an estimated 3.18m short length this one was certainly very large. Eddy initially estimated it as 700lbs plus but it could have been a fair bit bigger than that!

Meanwhile, On Stike’s Capt. Josh Bruynzeel has likewise been putting his anglers on some great fishing, and with his anglers of the junior variety this week, has been playing his part in hooking the next generation of marlin addicts.  Brothers Wil (11 years old) and Sam (7 years old) started the trip with an estimated 400lb blue for Wil that took a two hours of hard work for the youngster and finished yesterday with a 3-3-3 black marlin and 4-4-3 sailfish making it a grand slam for the trip!

As for Broome – Any of the Broome peeps want to share a report? Cheers!