Anglers on board the 38 boats competing in the 2015 Gold Coast GFC Garmin Blue Marlin Classic got rough treatment to the start of fishing with windy and rough condition though not a strong wind warning which meant the fishing could go ahead.  And the fishing was tough in the conditions with just 5 blues and 3 blacks on recorded on Day 1 (Saturday). A 19.2kg wahoo was also weighed in.

On Day 2 (Sunday) a better result with 11 marlin tagged and one weighed in at 169kg to the team on God’s Hands.  A total of 7 dollies were also weighed for the weekend up to 15.2kg.

1st place went to the team on the 40 Cabo Zeus skippered by Ben Colvin with anglers graham McCloy and Mark Bird. Mark caught a black marlin on Sunday and a striped marlin on Sunday in the Blue Marlin Classic!

2nd place went to the team on the 55 Viking Everwilling which has just moved up to the Gold Coast club from Port Hacking also with 2 fish – 1 blue and 1 black. And third place (all on countback) went to the team with Capt. Ross McCubbin on board Lucky Strike, the 34 Blackwatch, with 2 blue marlin.

The tournament was hosted out of the Southport Yacht Club and by all reports a great weekend was had by all. Congrats to everyone who competed!

Congrats to young Cory Radford on Climax who has been breaking records again. This time after a long night of drifting for sharks (and just about to cook some bacon and eggs for breakfast ) Cory got a bite on a live bait on 10kg. After a long 5hr fight they got the striped marlin on the boat. Another hour long drive back to the weigh station later it 72.5kg which is a new pending Australian an NSW Small Fry record. Well done Cory!

There were just a few other fish round. Dave (Tucker) fished on Mojo and managed to tag a nice striped marlin to first time angler Trish Hann. Gunrunner also raised a few but no luck in getting a bite. 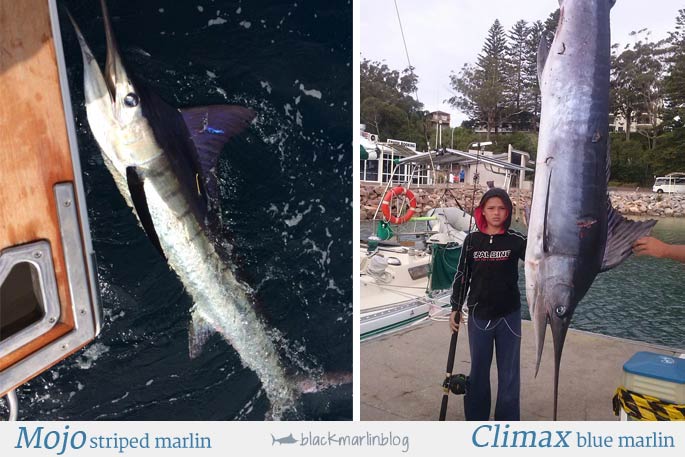 And completely outside of marlin fishing, but very well worth a mention this morning – Toowoomba boy, Carl Jocumsen is the first ever Australian competing in the US based Bassmaster Elite Series after qualifying last year – and more than holding his own against the best in the world.

Fishing in just his second event in the series, the first three days of fishing saw Carl break his own personal best tournament bag limit with 19lb 14oz  on Day 1 finishing in 27th place. Day 2 he bettered that with 26lb 10oz to catapult him up the leaderboard to 3rd position (and making the cut from 113 to 53 anglers in the process). On Day 3, with a weight of 18lbs the final hurdle was cleared making Carl one of only 12 anglers to fish the final day.

And with what seemed like the whole of Australia watching on overnight Carl finished 6 out of the final 12 anglers (from an original field of 113). What a great result and we can only expect bigger and better things from here. Well done to Carl and his support team!

Show your support for Carl here and follow the Bassmaster Elite Series here.