From Sam Lythgo a quick wrap up from yesterday’s ANZAC Day Shield.

Great conditions greeted a small but willing fleet for the annual ANZAC Shield. Plenty of fish seen with some solid blues caught and lost. Everwilling won with 2 blues with most boats catching at least one. Brilliant Company finished the day 7-5-3 with a late one to top off the day after cease fishing. 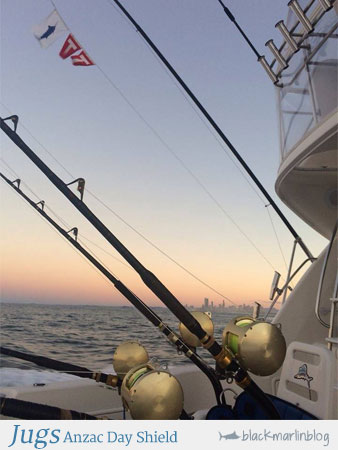 Great to hear of the blues in numbers again. Brilliant Company’s fish all went to first time blue marlin anglers. And Matt Caelli sent me the above pic from on Jugs who were also on two blues on countback. Matt said that they ended up 2 from 3 with a number of fish around — he heard of boats getting as many as 8 bites!  Barry Alty’s Mistress has also been on the fish. They went 4-4-2 Saturday following up from the previous day’s 6-5-2.

The ANZAC Day Shield is an annual event on the Gold Coast and a fantastic day on the water with donations going to Legacy.

Mooloolaba GFC’s is also being held this weekend and there sounds like a few blues and blacks up there as well. Hopefully report to come.