While the southern fleet have reported plenty of blue marlin fishing past Fraser on their way south after the Cairns marlin season – including Tradition’s Capt. Tim Richardson who released the estimate 450lb blue for angler Anthony Goulding on Saturday on his way through (pic above) – there have also been some encounters with big black marlin on the way through as well.

Case and point Rod Hawkin’s C’Mon Aussie making his way home after his first season off Cairns, and spending several days fishing the area again this week before the journey continues, put his younger son Corey onto a nice one on Saturday.  After releasing one earlier in the day about 150lbs north of Fraser, another jumped on and this bigger fish put 11 year old Corey through his paces.  Fighting on 80lb chair tackle for 2 and a half hours the fish unfortunately came up dead and measured out around 700lbs! 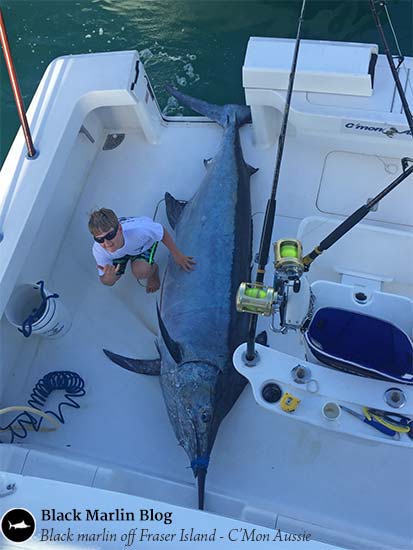 Yorkeys Knob’s Wahi Wahi tournament was held off Cairns over the weekend so hopefully a report from the comp coming soon!