A great recap report from Brett Pheeney (Brettski Fishing) from the tail end of a great little black marlin season off Hervey Bay and Fraser Island.

“Hervey Bay has seen some great catches of pelagic fish this season from plague proportions of bonito and mackeral, to monster tuna and small black marlin that you can sight cast to on the flats.

I (Brett) was lucky enough to have a few guys shooting a video on the boat for a week which worked out to be one of the best weeks fishing I have had for quite a while.

It was a slow start to the marlin run this year but when they did turn up they were in good numbers and it wasn’t uncommon to see 10 or more fish in a day. There were a lot of boats chasing them this year with most people towing pushers, which was also tried on our boat. However, we found the most successful rig to be a garfish bridled rigged with a circle hook under a pink skirt along side a bird teaser.

The circle hook was actually giving a better hook up ratio and always made for an easy release as the fish was always hooked in the corner of the mouth. We were also seeing more fish coming up on the gar and even hitting the bait multiple times if they didn’t take it straight away. Most fish caught were between 20 and 40kg with the odd fish coming in slightly larger, up to 50kg. Fish of this size provide for an excellent fight on a 4000 size reel spooled with 20-30lb line. This is especially due to the fact that the majority of fish are hooked in shallow water and spend almost as much time out of the water as they do in.

Those who were competing in the Hervey Bay Game Fishing Tournament were more than happy to travel the extra distance and chase some of the bigger blacks and blues which were lurking offshore on the eastern side of Fraser Island in deeper water. However the highlight of the whole season had to be the huge 80kg big eye tuna which was sight casted on fly in less then 2 meters deep of crystal clear water. Watching a fish of this size dog it out over shallow sandy flats was nothing short of epic and something I’ll definitely remember for a long time.

All in all a pretty successful season, already looking forward to next year.”

Thanks so much Brett and for the great photos as well! Click on the photos to enlarge and scroll through the entire gallery (6 photos).

And thank you very much to Paul Poulter (Think Big) for a report from the Wahi Wahi comp who fished the tournament and were able to give us some of the results!

Paul reports that the weather was fantastic and so a couple of boats headed out to the sea mount to search for the monster wahoo to try to win the $10,000 top prize.  Boats were allowed to weigh up to 2 of each species and scored as a team event.  Being the Wahi Wahi comp, the top prize was for the heaviest combination of 1 wahoo and 1 mahi mahi followed by heaviest wahoo, heaviest mahi mahi, heaviest combo of 2 wahoo and 2 mahi mahi and champion junior.

Again there were plenty of mahi mahi around with most boats releasing some of their smaller models though the wahoo were a little bit more elusive.

Think Big scored on the Saturday we had a couple of nice mahi and a wahoo which got even better when Paul hooked a 200lb black marlin on the 24kg ( photo below).  For a change, since Paul was on the fish and fishing 2 up, it was Sharon the busy bee clearing the deck so they could fight the fish with was successfully tagged after 15 minutes. Paul says there were more billfish hooked over the 2 days including one on Deks with Dave’s youngest daughter hooking and tagging her first marlin.

Sunday was another glamour day and Think Big hooked their 2nd wahoo early on and not needing another mahi persevered to find that monster wahoo – only to find more mahi mahi…. (dollies!)

Final results:
Heaviest combo of 1 wahoo and 1 mahi went to Therapy with a monster wahoo of around 24kg and a mahi over 5 kg.  Their wahoo was taken from the downrigger on a big 5 spot garfish on 10kg somewhere near the Bank and was caught by Anthony Henderson (Anto) – his first wahoo!

Heaviest wahoo was not awarded as can not be won by top team. This prize will jackpot for next year..

Heaviest mahi went to Resolution who caught a mahi over 11kg (to beat Pauls which was 10.8 kg!)

Paul is unsure of the other prizes but tells me the tournament was very well run and all participants had a fantastic weekend!

Thanks so much Paul! 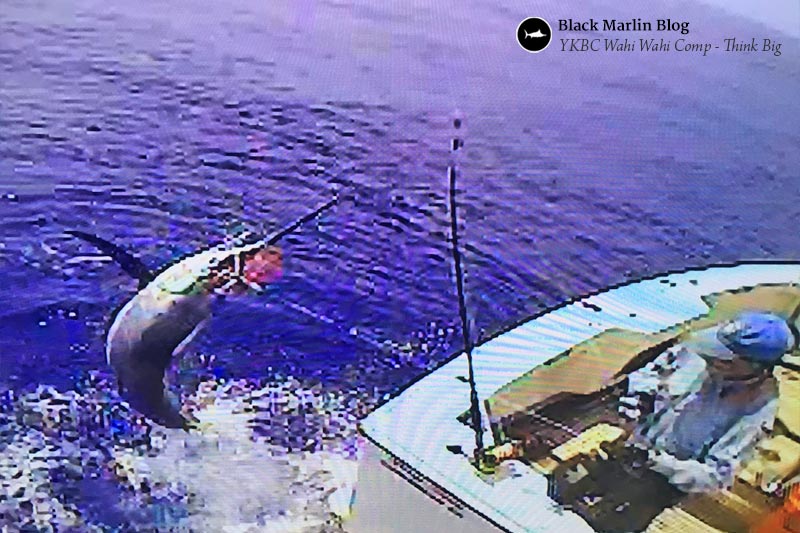