Marlin all over Australia

Reports from all over the country today not only up in Cairns where fishing has been a little patchy but some big fish swimming among them in the leadup to the 50th Anniversary Black Marlin Tournament which starts with the briefing tomorrow.

Capt. Adam Jordan’s Iona III has added another couple since their big one with Adam telling me they added a 450lb Thursday and 300lb-er yesterday. Picture of the 450 for angler Tom from South Africa below. 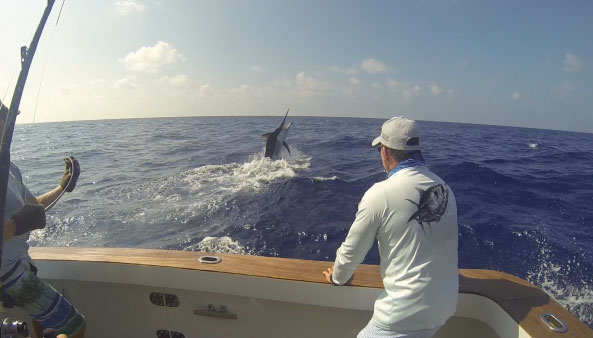 Capt. Luke Fallon’s KEKOA kicked off season 2016 with one on Thursday and raised another couple yesterday that wouldn’t bite.

The Gold Coast has had both the run of the weather and the bites with Capt. Ross McCubbin telling me that most of the fleet experienced up to 5 bites from the blue marlin yesterday. Capt. Brett Alty’s Mistress converted 2 from 7 bites with plenty more back out today enjoying the weekend!

And it never stops over in WA. Exmouth just continues to deliver with Capt. Eddy Lawler’s Peak Sport Fishing delivering his guests to another slam yesterday made up of a blue marlin on the pitch, a double header of a black marlin as well as a sailfish.  That was Eddy’s second grand slam on the week with another featuring the same fishy contenders on Wednesday.