Without wanting to give the game away and while we know who the winners are (congrats Askari!) I’ll wait to share the full list of winners and grinners until after the Presentation Gala (and Hall of Fame Inductions!) tonight. So just a wrap up of the final day of fishing today.

The final day added another 9 tags to the total tournament tally of 43 fish – not red hot fishing by any means although the GBR did again deliver a grander black marlin to celebrate the anniversary of the first!

Reg Moore’s Duyfken got on the board early with a fish to angler Scott (for his birthday!) that Reg put at 500lbs within the first 10 minutes of fishing. This was shortly followed by small fish for Assegai, Calypso and Ratbag.  Meanwhile Capt. Bill Billson’s Viking had been hooked up for some time….something telling.

In the end, Capt. Tim Dean’s Calypso hooked up again and tagged an 800lb…blue marlin, giving photog David Granville the opportunity for the awesome shot above (and another of their 250 black below), to give the leaders a bit of a fright.

And then the word came in, tag and release of 1000lb+ black marlin on board Viking for angler Chase Hooper!  Congrats to all on board for a superb fish! (Photos to come – they deserve their own post!)

Another couple of boats were able to get on the scoreboard with the MGFC team on Pannawonica tagging a 350lb-er for Matt, Capt. Daniel Carlson’s Little Audrey tagging a 300lber for Ken and Sunshine Coast GFCers on Kamikaze reporting the last fish of the comp at 350lbs for Bill Irvine! 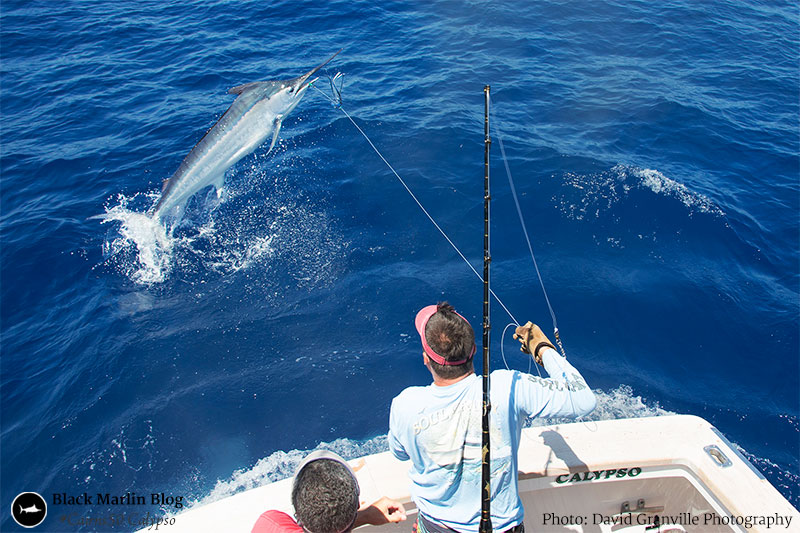