The summer season has well and truly kicked off on the Gold and Sunshine Coasts with crews enjoying the holiday period on the water. Quite a few of the juvenile black marlin are around as well as blues further wide and plenty of dolphin fish as well.

Leigh Holtsbaum fished on Sea Eagle and found the blacks in 50 fathoms off the Pin Bar. On Tuesday the had a ‘Finding New Ground’ day with Mikey Greco and Dan Sleeman ending up 3-3-2 tagging a couple at 60kg and 35kg. Going back to the same area Wednesday the went 3-2-1 with Erin Nicholls tagging his first marlin about 55kg also catching a nice 15kg mahi mahi for the table. 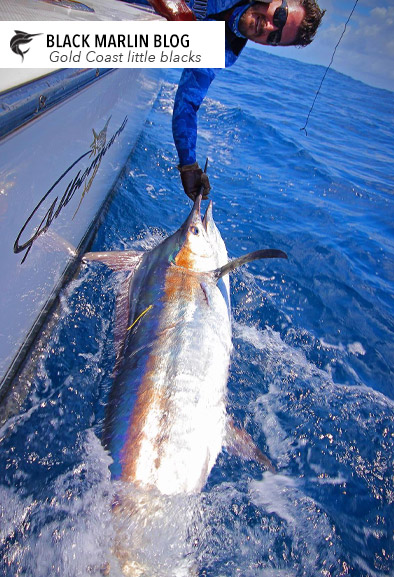 I have the first few season 2016 videos from Cairns to share (and plenty more to come no doubt!) but its not all over in Cairns just yet. Capt. Ross Finlayson on Top Shot reports there are quite a few sailfish around on the reefs and are catching most days including a 2 from 3 yesterday (photo) and other pelagics about!

Video three – And one from me, our first video of a big fish for novice angler Chris on board Capt. Luke Fallon’s KEKOA