Big Saturday (numbers) on the water

I wasn’t going to post until Monday but good numbers yesterday should be shared and hopefully only added to today!

Mooloolaba GFC boats fishing included Reel Lady who went 2 from 5.  Jamie reports that while there are still marlin in the same area out wider where they have been catching them over the past few weeks, some have pushed inshore. Incognito also tagged one in the Redcliffe comp. Quite a few more boats are heading out today.

Off the Gold Coast there was some good action on both the blacks (light tackle) and blue marlin.  Matt Caelli tells me they fished on Jugs Australia Day for a blue for Chelsea which was her first blue marlin. The followed up again yesterday with a 5-4-3 including another first blue marlin for young Bae Harding. Congrats Chelsea and Bae (photo top)!  Ramjet also finished with a 4-4-3 heavy tackle while Ryan Goding reports a 6-3-3 tagged black marlin  on Mojo yesterday which was following up from 2-2-2  on Australia Day.

Another hot day of fishing for Capt. Eddy Lawler’s Peak Sport Fishing after a few tougher days on the water with the bite hard to find. Eddy reports they went 7-6-5 blue marlin yesterday for Karen Sobeycatching including a few solid fish at 450 and 550lbs!

Also heard there were a few fish at the Gibber (Port) again so look forward to reports for tomorrow! 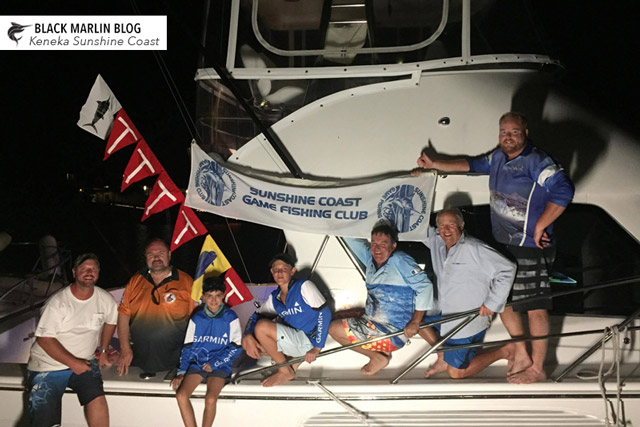