Reports are hit and miss from Port Stephens through Sydney and south, as hit and miss as the fishing by the sounds (since Calypso’s big day last week anyways!). Today we have success on blacks and stripes (separately) to report!

From off Kiama and JB, Chloe and Tom Lawrence fished 3 days over the last week and a half for a total 5 from 7 on blacks. Chloe confirms that it has been very hit and miss so far with bait spread out.  But some nice ones for them for sure (pics at top). Chloe also said that they are yet to raise a stripe this season.

Conversely, Port Hacking GFC’s Bruce Rayment tells me that they’ve only encountered stripes so far this season, but have been working the top of the shelf rather than the inshore grounds.

He reports an epic day out of Port Hacking on Friday 27th on Avalon with Belinda Rayment and Chris Wienholt going 7-2-2 on striped marlin on lures.

Bruce reports that all of the fish were raised between 80fa and 110fa and they encountered a bait ball covered in stripies at around 11am getting multiple strikes from different fish, and finally getting the hook to set on one. Chris Wienholt did a top job on the rod tagging 75kg model within 20 minutes for his first of the season.

More missed hookups before finally another one set at 4pm for Belinda who did her usual great job on the rod and the tag went into a 60kg model for her first of the season as well. 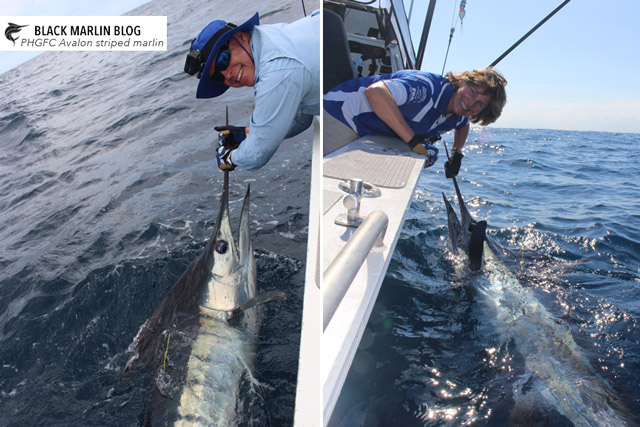