Report from Coffs guru Rick O’Ferrall who tells me that numerous Coffs game boats (including Rick) have spent many hours in just the past week looking for juvenile black marlin, but they simply aren’t there yet, despite showing up further south. The usual Coffs Coast black marlin hot spots from North Solitary Island down to Southwest Rocks aren’t seeing anything more than one or two little blacks, and while the (very) occasional one shows up chasing a snapper fisherman’s bait or making a pass at a lure. You know it’s not too good when you used to be able to raise half a dozen per boat on a decent day in February on the Coffs Coast. This past week it has been more a matter of half a dozen boats only raising one between them (plus a shark or two)!

Striped marlin are the surprise this week, with stripes hitting lures in the 27-29C water when you’d normally expect them to be further south where it’s cooler. The fact that there are lashings of good bait up and down the coast might have a lot to do with it.

Rick also reports unfortunately the blue marlin are also very thin on the ground, and you have to work really hard to find them. Again, in February most years, you’d be pretty sure of raising 2 or 3 if you were having a reasonable day, but now, just getting one up makes a good day. On Foreign Exchange they’ve found some success tagging a blue on their last three outings beyond the edge of the continental shelf. On Saturday they tagged a very fat 150kg blue after a 20 minute fight in 28C water after it crash tackled the long corner. Rodman Sam French did great work for a bloke with a recently dislocated shoulder, and the photos above shows him bailing back over the transom from where he’d been watching the spread to get the rod after the fish struck!  Great reaction Sam!

Austen Ramage made the trip up from Melbourne on Friday night hoping to catch a marlin for first time marlin angler – Mitch, from his 6m centre console. Austen tells me they skip baited all morning, and early afternoon got the bite from this healthy striped marlin (pics below). Austen said it was a very aggro fish and was chasing them all over the ocean rather than the other way round and putting on a show for Mitch and Shannon who had never seen a marlin before! A healthy release followed after 25mins. Austen reports a few other fish tailing in the southerly during the afternoon, but very lazy and uninterested in the baits. 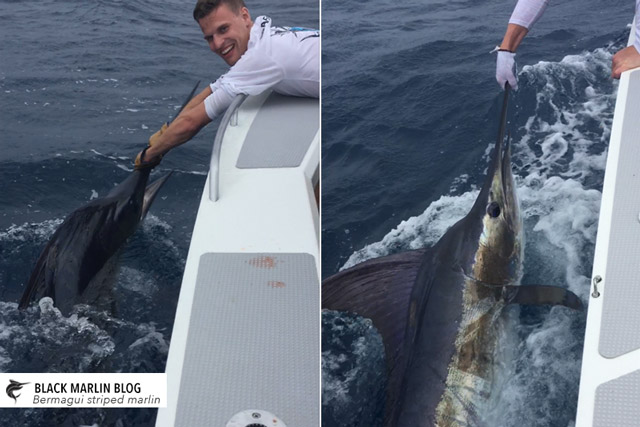