Update: Sails in the west too! Following up from the team on Blue Lightning at the Montebello Islands, Mackay’s Luke Darby was fishing in Broome yesterday fishing with WA Barra Charters for 4 from 5 sails and raised a couple more!

Plenty of light tackle fish around all over at the moment.  Lets start at the top!

The sailfish off Weipa have kicked into gear the last several days. Saturday in particular was hot fishing with club boats Big Bills skipppered by Izzy McCann tagging 9 sails while Nathan Billing on Frequent Flyer caught 8 on fly! 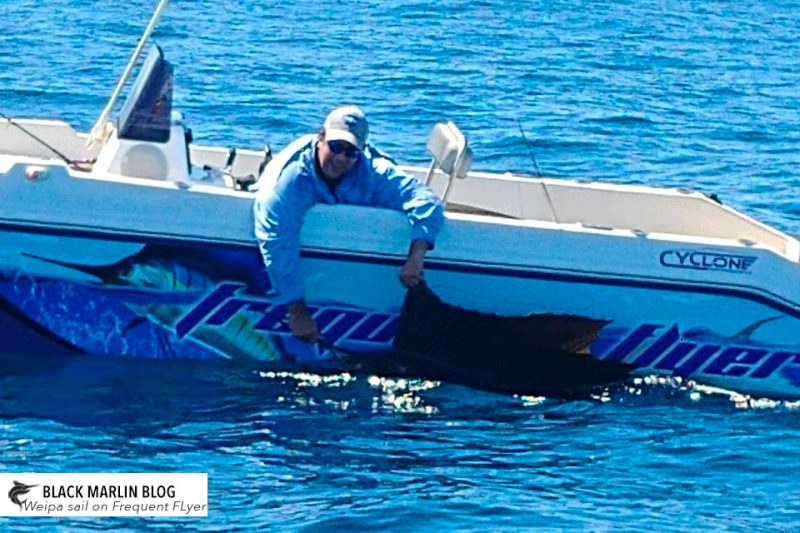 Mick and Lee Dykstra on their new 40 Whitecap Incognito went 3 from 4 on Saturday – 1 sailfish and 2 estimated 10kg black marlin. They also had a double hookup late Sunday, an est 30kg black and a smaller 10-12kg black but unfortunately missed the chance to tag both. On Saturday Reef Raine went 1 from 1 black marlin late in the day.

Unfortunately the weather stopped the smaller boats getting to where they wanted to go. But the bait looks good and all seems to ramping up heading towards the Billfish Challenge late August. Thanks Renee for the updates!

More reports off the juvies as far down as the Sunshine Coast already.  The Southwell family with youngsters Zac and Bridie on the rods tagged two baby blacks yesterday (pic). Following up from a few caught last weekend.