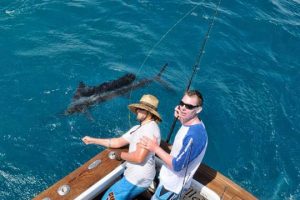 The annual Innisfail Billfish Tournament (light tackle) has begun to fine weather and good fishing. It was a short wait, but after jumping off a sailfish earlier Castille III hooked up again and managed to tag and release a sail for angler Anthony Genocchio just after noon to put the first points on the board.  That was followed by a small flurry which saw Moana III in the lead at the end of Day 1 with two sails tagged and 2 gamefish to weigh, from Castille III also with two tags and a gamefish to weigh – 7 sails in total for the day. The last points for the day were scored by Cairns Bluewater’s Caz Martin fishing on Onstrike. Ben also reports the fancy dress party was a good time and there are photos (picture in your head Capt. Dean Beech as Batman and Jordan “Tinkerbell” Tinker as the Incredible Hulk).

On the heavy tackle side, fishing at Linden Bank, Capt. Tim Dean on Calypso released two around the 450lb mark yesterday, following another of the same size the day before. Tim reports fishing is good with doggies, makerel and marlin–great combo!  The Phantom also started their 2010 heavy tackle campaign at the Bank pulling the hooks on one at 200lb and raising another around the 700lb mark that wouldn’t bite.