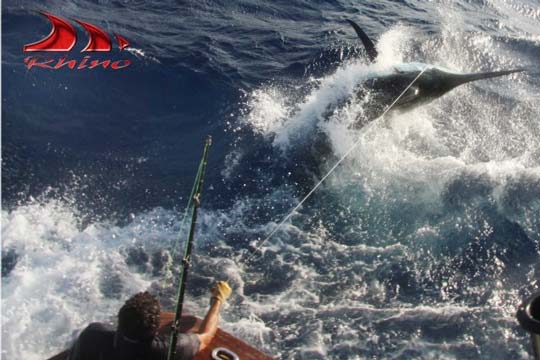 Rhino sent me a couple of pictures of Andrea’s fish on Monday on Iona 2 that Capt. Trent put at 850lbs.  Rhino always takes great photos and this is no exception.  Another below – thanks Rhino!

Lake Macquarie youngster Jacinta Thomas is having a great year for marlin.  Earlier this year, as a 12 year old she took out champion junior angler at the NSW Interclub tournament on her father Steve’s new boat Amokura.  This week she’s trying her hand at heavy tackle fishing and Tuesday released her biggest marlin yet at 400lbs on Opal Ridge.

On KEKOA our Tuesday started off on the right note with a quick one from three early, but then it all went quiet.  Regardless, Stuart was successful with this one (below) that gave us a great aerial display around the back of the boat.

And sail fishing on the Sunshine Coast continues to be red hot — and the guys are experiencing some better weather down there too.  Smithy got five Monday and another four Tuesday both before lunch on half day charters aboard Triton IV.

David Granville sneaked out in his Formula 15 Gotimon for a few hours Tuesday morning and tagged 3 including a recapture which David says looks quite old based on the barnacles that were on it. Check out David’s clip below for footage on the Go Pro of Tuesday’s solo releases:

David also tells me that Brent and Sarah Higgins aboard Kartika also had two by lunch and so did the 36 Black Watch – Watch Ya Problem.

Meanwhile in the north, the weather remains generally much less friendly and as a result, the Mission Beach GFC have postponed their tournament once again to the weekend of October 23/24.