Update: We just trolled past Capt. Tim Dean and the film crew on board Calypso and, what do you know, it seems like I missed the “fishflash” yesterday. Congratulations to the boys and Paul Worsteling and the IFISH crew on board who topped off their 650lb-er the day before with a grander black marlin yesterday!  It was only on a recent episode we watched them have a mad days fishing on Calypso off Port Stephens and now they’ve done it again! 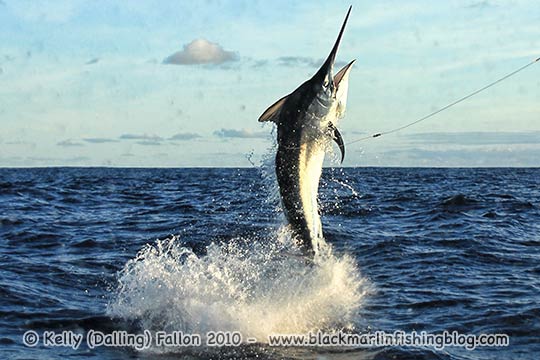 Burls fish on KEKOA yesterday – later afternoon bite.  His first marlin.
Yesterday was probably the best weather we’ve had yet this season (although not forecasted to hang around for long) and the calm seas combined with the run in tide all afternoon meant that we could expect a late afternoon bite, and we did.  It was just before five when we got our first bite on KEKOA ending up with two from three  for Dean and Burls – pulling the bait out of the mouth of the final larger fish for Mr. X just on dusk.

Fishing up at 10, Capt. Tim on Tradition also released the two at 300 and 400lbs.  Tim reports marking plenty.  On Number 3, Little Audrey and Capt. Dan Carlson’s luck turned around and they released the days big fish at 850lb for American angler Mike Hudson, his first black marlin.  Dan reports she has another fish swimming with her through the whole fight.

Iona 2 released a 200lb-er and Capt. Adam also reports that Trent on the blue Iona at Number 10 had the bite out of another big fish.  I also heard from Capt. Dan McCarthy on Moana III who is making his way north for the Lizard Island tournament, with his son Dougie catching his first yellowfin tuna yesterday. Congrats Dougie!