Did I say FIRE? (Updated Again) 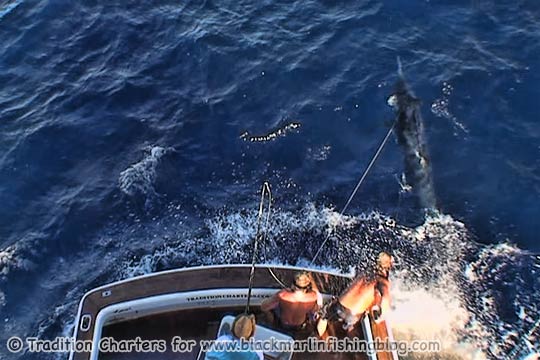 Another great fish for the guys on Tradition – 900lbs for angler Les.

What a day on the water, as reports just got better and better. By three o’clock we’d heard from Simon on Dreamin’ On at Linden Bank that they had released two including a nice 750lb black (pict above).  Then word filtered down that Capt. Tim Richardson on Tradition had let another nice fish go, one Capt. Tim called 900lb (main picture).  Tim’s having a cracker of a season already.

But if this sounds good already, it was better behind Castille III with Capt. Dean Beech releasing four fish, an 850lb, 450lb and 200lb (on 50lb line)…and then topped it off with a 950lb-er to end the day on a huge high!  Capt. Dean tells me that another Dean, Capt. Tim Dean on Calypso also had a great day releasing one at 900lbs in the middle. (Update: Actually, I’m told this fish was 650lb…! Thanks Tim!)

On the lower Ribbons, Capt. Daniel Carlson is starting his first full season at the helm of Little Audrey in style. Although they didn’t convert they had a lot of bites including a couple big ones. Daniel is picking away at them every day.  Nearby on KEKOA, we were hounded on the TowCam camera but had trouble converting those as well, releasing just the one for self proclaimed ‘Mr. X’ (picture above).

Early in the day, we were happy to see Cjig and Capt. Ross McCubbin come a-wandering up the reef as they make their way to Lizard Island.  And they also hooked up nearby and I was able to snap some pics of their nice fish (also above).

A reminder that there are a host of tournaments starting this week. Check out the tournament calendar for more details. The Yorkey’s Knob Boating Club are also hosting a “Game Essentials” evening on Monday, October 18.