The foundation will be hosting a trip to Lizard Island in November 2011 and fishing on board Tradition with Capt. Tim Richardson.  Joining TBF’s Elliott Stark on this trip will be the lucky winners of a membership lottery for Australian and New Zealand anglers who join The Billfish Foundation between January and October (the winner will be drawn on October 1). Join the foundation to get yourself in the running for this exciting trip to the home of the Giant Black Marlin! 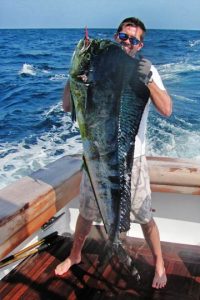 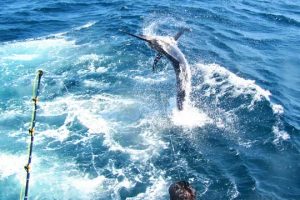 Elliott sent me a report from his recent trip to fish Guatemala with Captain Brad Philipps where they caught 25 sails the best day they fished.   Capt. Brad has been recording some more great numbers (they caught 44 in a day a couple days previously).  Moving down to Panama, on the Pacific side, Elliott fished for a day and caught a big dolphin fish and raised a blue that was in the neighborhood of 700lb. On the next trip, Richard Webb released a 400 pound black – not bad for his first marlin!