North Queensland: A few sails around 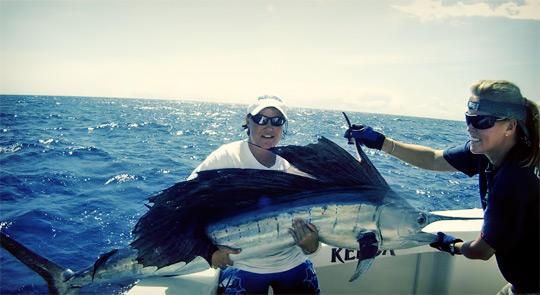 Two O’Briens converged on Townsville over the weekend for a few weeks of light tackle including the Townsville Billfish Challenge, before heading up to Cairns for the Giant Black Marlin Season next month.  Castille III heading north from the Gold Coast with a stopover at Hamilton Island on the way released a sailfish for Terry Parker at Cape Bowling Green on the way through.  On KEKOA we headed south from Cairns and released a sailfish off Flora Reef south of Fitzroy Island for Talina O’Brien which marked her very first sailfish – which had to come out for a quick photo before the release seeing as though Talina has been trying to catch a sailfish for over 15 years!  I should point out that she has caught many light and heavy tackle marlin, but has been pretty unlucky when its come to sails.  And it was a pretty good effort from the all girl crew.  We ended up with one from four raising another that wouldn’t bite, jumping one off and breaking the line on a bigger fish.

While the weather turned it on off Townsville for the weekend (but perhaps the sore heads after the annual club presentation preventing many of the TGFC boats from enjoying it), it blew off Cairns once again delaying the Yorkey’s Knob Light Tackle Slam for the second time.  But it does look like backing off in time for the start of the Cairns BlueWater 6kg Billfish Tournament which will be held out of Fitzroy Island fishing from Thursday (touch wood!)  Cairns Bluewater Game Fishing Club President Ian Hodge tells me that at the moment they have 27 boats lining up for start fishing. Hopefully it will be a cracker!