Capt. Tim Richardson on Tradition has discovered the fish ahead of the start of the Lizard Island Black Marlin Classic today.  After leaving Cooktown with his regular guests Lydie and Pete, they went two from four at Number 10 Ribbon.  Tim says they tagged a 300 and 350lb-er for Lydie and missed a bigger fish that he put at 700lb beside the boat on the double. That’s great news for boats competing in the comp who will generally start fishing at the top at Number 10 Ribbon.  I’ll be live blogging the results as they happen so check back at start fishing at 11am. 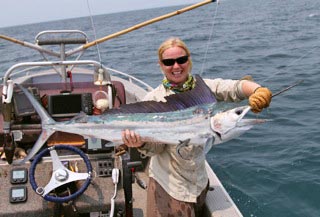 There’s a bit of a hot billfish bite over in Weipa.  Ben told me he had a relatively frustrating week with stories of near misses from the other boats including Fish (Alan Philliskirk) who raised 11 this week (both sails and blacks).  Jason Owens (Owey) hooked a black and a sail from 4 raised but unfortunately couldn’t stay connected.  Likewise other local anglers had been reporting encounters all week.

On Friday, Ben was finally able to make it out for a couple of hours and jumped two sails off and raised a 25kg black that wouldn’t eat.  But it was Saturday that it all came together when he and Kristy made it out again on Last Cast and ended up 3 from 5, releasing two sails and a black marlin (from 4 sails and a black raised).

Ben says Kristy’s black marlin was just 113cm short length and Ben estimates it to be just 6kg!!!  Great stuff! I can’t wait to hear the report from their next trip out. That has definitely given some of the guys, who thought they knew where the baby billfish went, something to ponder!