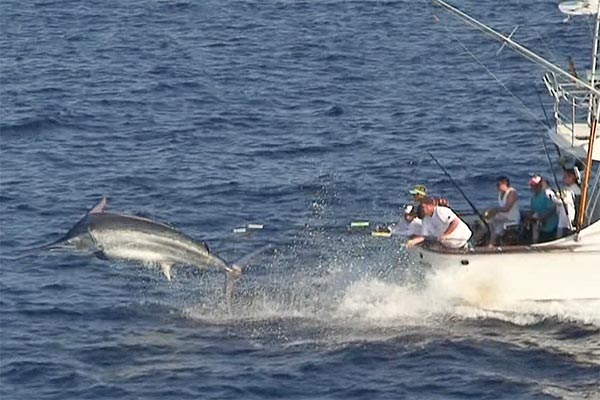 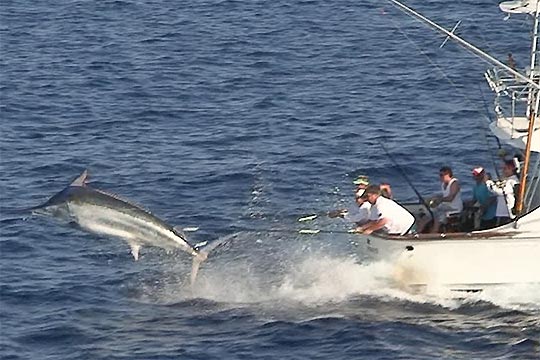 Photos from Capt. Tim Richardson on Tradition of Capt. Corey Hard on Askari’s second tag of Day 6 that Capt. Corey put at over 1000lbs.

Askari has streaked further in front and go into the final day with a five fish lead. The other players in the top placings adding two tags each on Day 6 to keep it exciting for the runners up.  Little Audrey is on 10 tags which is one in front of Top Shot on 9 (Top Shot is reporting on Channel 10 so I can’t hear his reports) and Hellraiser, Viking and Kanahoee on 8.

Calypso and Hot Shot also added two tags each to put them on 7 tags and threatening.  Sparticus is on 6 from Hattitude and Tradition on 5.

Outside the comp Capt. Adam Jordan’s back from Bali and steered Iona 2 back to the Bus Stop releasing an 800lb-er for Noel Dowde yesterday and jumped a 300lb-er off for Sue Ahlers at the back of the boat and raised two more big fish.  We released one on KEKOA at Number 3 on our way into Cooktown.

Just getting everything together after overnight changeover as we head out again this morning.  I have some more reports and photos to come later this morning so stay tuned.  Today’s live blog should also be a cracker!