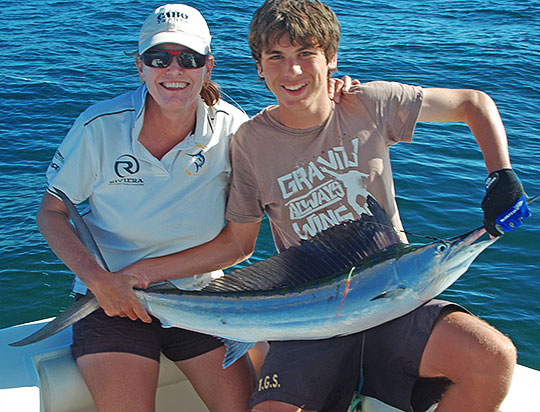 I received a wonderful update from Donna and family in Townsville last night that’s giving us some great hope for north Queensland’s little black marlin season this year. Fishing over the long weekend off the Palm Island group to the north of Townsville Donna and family caught this little guy on the way home to town on Monday.  Donna was the angler for the estimated 4kg baby black marlin which was caught on 6kg line on their boat Zuri. It was son Alex’s first tag shot (and with cork on the end it only went in a little way).  Other son Jack lifted it on board for a photo and then a quick release.  And skipper husband Sam completed the family effort.

Donna tells me she has heard that this is the 18th baby black caught in the last couple of months between Cairns and Cape Bowling Green off Townsville! A good sign for the season ahead and the annual Toyota Billfish Challenge at the end of August!

And a numbers breakdown from the team on board Flying Fisher of their Port Stephens season. Jay says their 122 total marlin for the season is made up of 72 striped marlin, 44 black marlin and 6 blue marlin.  122 caught from 145 raised – great conversion rate!