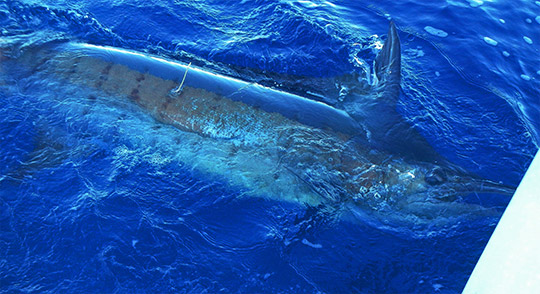 Pat Skeehan kindly sent me an update from their day Saturday on the grounds wide of Cape Moreton on Mooloolaba GFC club boat Luna with Nathan Douglass on the deck and Wayne Douglas on the sticks.  Pat says that the conditions could be described as nothing short of epic.  Spending the morning amongst a huge school of pilot whales, after two afternoon lacklustre strikes they were able to get a solid hook-up on the shotgun lure for Pat’s partner Kat-Dog (I’ll have to remember that nickname for the Ladies Ribbons this year Kat!).   It was Kat’s first trip out targeting blue marlin and after a 45 minute fight on 80lb tackle Nathan managed to get the tag in on the blue they estimated at approximately 200kgs which was released in excellent condition. Pat says that Kat was still recovering yesterday but they were unable to wipe the smile off her face. Congrats Kat on your first marlin (photo)!

Meanwhile, another first blue marlin report from Nick Currey on Aluhra from Saturday as well who went 1-1-1 east of Point Lookout for Sophie Currey – her first blue which they put at about 270lb on 24kg standup in the same perfect sea conditions.