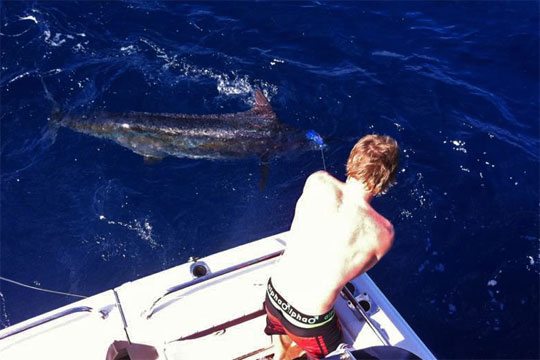 Ben Steer sent me a late report from last Sunday/Monday off Cape Moreton.  Ben was out with skipper Shane (Steer) on board onboard Incoming.  On Sunday they went 1-1-1 on a blue marlin that Shane put at well over 600lbs and had another up the had a go at 4 different lures but wouldn’t hook up. Back out again on Monday they converted three blues (3-3-3) between 280 and 400lbs as well as a nice dolphin fish.  One of the blues was a first ever  billfish for angler Wendy Steer.  Two other boats fishing as well including Hard’n’up skippered by Russel Fairy went 1-1-1 on a blue that he put at over 200kg while Compromise, skippered by Peter Fenwick also went 1-1-1 on a blue that he put at around 150kg.