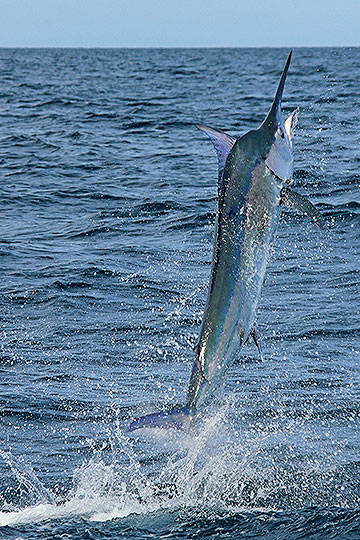 With the colder temperatures in the south, the marlin fishing reports have slowed. Vince on Barco is reporting 24-25 degree temperatures off the Gold Coast, not too bad for almost winter, although Vince says there is a lot more water now between fish.  The fished Friday and Saturday for a 1-0-0 blue marlin on Friday and 1-1-1 blue marlin on Saturday around the 450+lb mark as well as a mako shark.

A catch up report from David Trask on Big Business  fishing off Cape Moreton on Sunday the 13th for 2 from 4 blue marlin at 350 and 550lbs.  David says the one of the fish they dropped was a monster that he put at definitely over the thousand pound mark.  Its going to happen sooner or later!

On board Iona 2 on its way to Townsville, Rhino and Mustard straight lining north, had four bites on the inside edge of Cape Moreton – 3 blacks and a stripe – and caught the stripe!

As the fishing down south continues to slow, we look to the north and west for their upcoming seasons. Not that much has been happening in the north with the wind blowing out of control and non-stop for at least the last few weeks. The west is starting to shape up with Exmouth GFC reporting some beautiful conditions over the last few weeks with some boats raising 6-7 billfish a day.  With the bait schools thick in close, there should be an increase of billfish conversions is on the cards soon.