Exmouth’s Gamex 2013 has kicked off with Day 1 fishing yesterday. The club is reporting 28 billfish tagged; made up of 4 blue marlin, 6 sailfish and 18 black marlin and including a big blue marlin caught by Paul Rowe on Mahi Mahi III. There is no clear leader this early with a few boats on two tagged fish a piece.

Also word is filtering through from Port Stephens and south that there is good water to be found with marlin in it, which is good news for the rest of the tournaments coming up – including the 2013 Broken Bay Invitational (Sylvania Marina Caribbean Tournament) and rescheduled Jess Sams Tournament Ulladulla 2013 both on this weekend! (More details in the tournament calendar.) 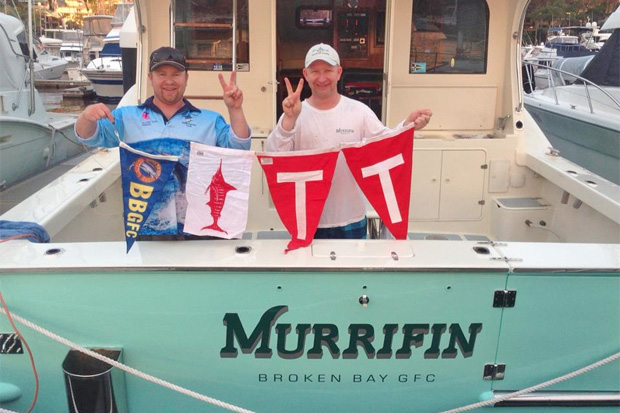 The Findlay brothers (Craig and Rod) took Murrifin home to Broken Bay for the tournament (from Port Stephens) on Friday and found the blue water going 4-3-2 on striped marlin. They missed a third on a double header, due to only being the two of them on board, which pulled the livie off the bridle 20ft of the transom. Rod says that the fishing on the improve down there with a bunch of boats finding a large floating rope yesterday and landing plenty of nice dolphinfish, rat yellowfins and wahoos.

John Satori tells me that Sydney game boat The Spanish Fly fished on Thursday wide of Sydney  and got busted off by a nice blue estimate a about 180kg in 1000 fathoms behind Browns. John says it was a perfect 27 degree water and luckily they managed to convert a 90kg black on the way home, right on the shelf as well.

And I also heard the little blacks are showing up right out the front of Ulladulla harbour in time for the Jess Sams Tournament too. Anyone know any more?

Back at Port Stephens Akuma reported 2-2-2 (a black and a stripe) on Saturday with a few of the charter fleet converting fish over the weekend as well. Hopefully the fishing getting better there for the latter part of the season as well.