A running update courtesy of Exmouth GFC which marked the best day’s fishing of the comp yet yesterday with 51 billfish tags among plenty of other species both weighed and released:

Anthony sent me a note about his epic day Sunday which resulted in a first marlin for his father on the Big Banana. After hitting the water at 5am (to beat the M5 traffic) they had a morning of hard work bottom bashing, for little reward. Heading back in to where they’d marked a colour/temp change earlier and within two minutes had a fish up on the long corner. Well, you have to read the rest of the story:

“Within a minute, we had over 800m out – slowest lure clear in history of game fishing! Dave is saying he can see the bottom of the spool…

I turn and chase, I was doing about 15 knots initially trying to get line back, Dad wound like a champ and kept it tight, belly all over the ocean, but we got half a spool back before it charged off again, this time north. Crept up the line and managed to get the spool ¾ full and then we had a stalemate. The fish was super unresponsive to change of direction, so thought it was wrapped or dead. 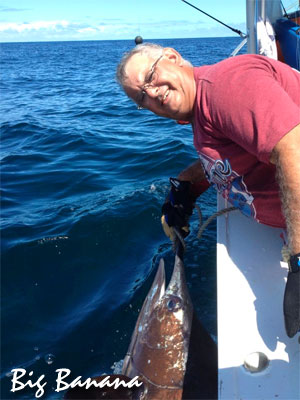 Took about 45 minutes, drove off the fish a few times and planed it up, Dave took the leader after about 1.5 hours and we got a bill rope on him. Hooked in the dorsal fin! There was some mouth damage so hook may (or may not) have dislodged but unsure how we stayed connected either way…

The old man was absolutely stoked! During the fight, I marked at least 6 or 7 substantial fish, marlin or big ‘fin I suppose, the yellowfin were busting up all around the boat as well.

I measured with the tag pole, and thought sh*t, this is much bigger then I first thought. Get the tape out, and Dave (he’s a chippy so he’s all about measuring twice, cut once), lines up with the fork and short length measures 2.95, I can’t believe it, so we check again, same digits! Girth was unbelievable and the fish was well fed and had a bulging gut. Short length chart puts it at 250ish kg. Completely wrapped!

Got a tag in, had a lot of colour come back and was biting my hand after about 20-25 minutes on the bill rope. Hopefully made it.

Very little Go Pro, a dodgy video of the fish boat side and only a few pics, but I won’t be forgetting this fish anytime soon!”