Gary Ryan on Ben My Chree tells me they fished north of Broughton Island yesterday out of Port Stephens and got bites from 4 little blacks and also released a whaler shark.  Ben said that he had two marlin novices on board who are no longer in the novice category.

Meanwhile the Tassie fleet was all talk yesterday of a big broadbill caught on the boat Hapuka. I hear they were trevalla fishing and were retrieving the drop when the fish followed it up to the boat (having a couple of goes on the way up). At first they thought it was a shark and threw it a bit of trace with a strip of tuna…and they were away. Angler James Smith fought the fish for about an hour on an old Penn Senator on 24kg. It eventually weighed in at 225.5kg! 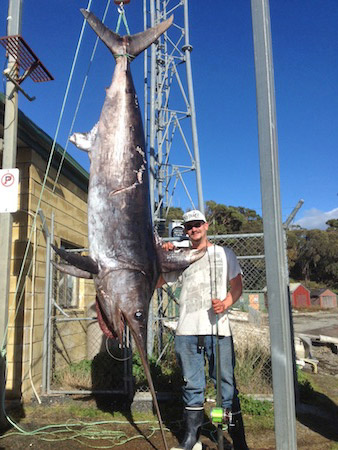