The tournament benefited from both excellent fishing and great weather. Nina tells me the tuna were everywhere and the ocean, flat calm~! This year the event also created history with 897 fish caught and released in the two days fishing from Saturday 9.00am – 6.00pm and Sunday 8.00am – 3.00pm! They believe it is definitely an Australian record, and pending World record!!

The final results were:

The event finished off at the Port Lincoln Hotel where everybody had a great time and 3 beautiful rods and reels was given to the three juniors by Bob Hutchinson, owner at Spot On Fishing and Camping Port Lincoln. 32 Trophies were handed out in total.

A big thank you to Nina Mattingley for the report! 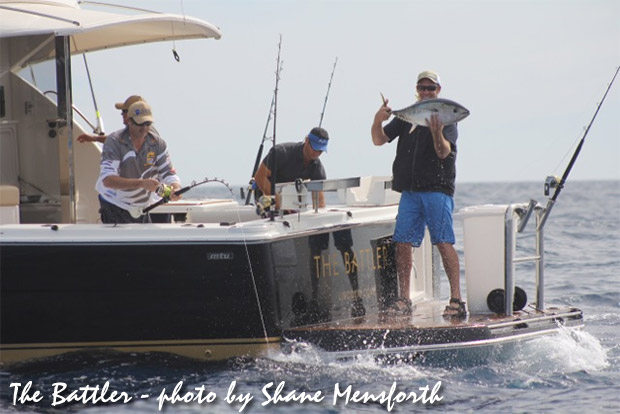 I also had a quick email from Nicole who owns Game Over with husband Darren. They’ve been teaching their youngster the love of gamefishing with son Mathew Sandy (aged 9) tagging his first black marlin whilst fishing the Tag and Alliance Tournament held at Bermagui this year in early March.  He won Champion Junior Angler and Highest Point Scoring Angler on Day 2.

Nicole tells me he then followed up this weekend and tagged his first striped marlin whilst fishing the Eden Game Fishing Tournament!