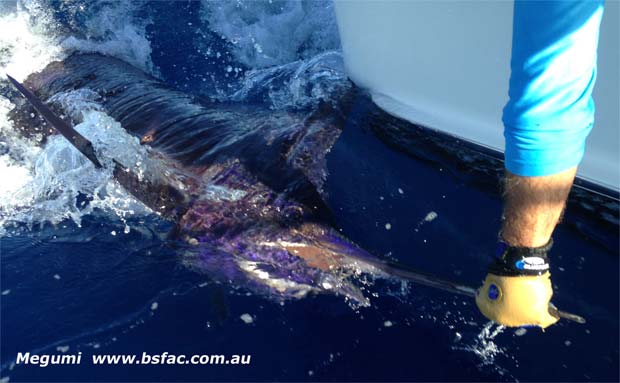 Report from Capt. Ken Brown on Megumi who fished the shelf from Point Lookout to Southport on Thursday and then east of Surfers Paradise on Friday.  On the way down on Thursday they had 2 soft bites from stripeys, but didn’t hook up.  Friday was a better day with 3 shots and all fish hooked.  One was a really solid blue around 500lb and BSFAC member Luke Martin fought it on 80 for over an hour before they pulled the hooks.  It was a shame as it was his first blue and a really good fish!

The second shot was a good sized short billed spearfish which was caught for angler Michael Jones caught while the 3rd was another solid blue around 400lb caught by Melbourne angler Andrew Donkin.  It was “Donks” first ever marlin and you couldn’t wipe the smile off his face.