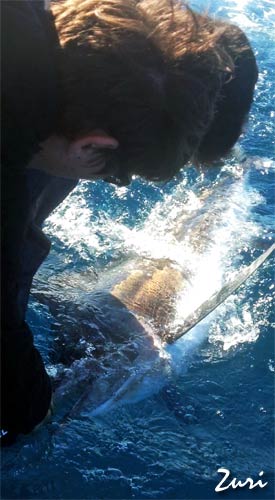 More updates as the Townsville little black marlin season kicks into gear. This one is from Jack Nicolosi who was fishing with brother Alex and mum and dad Donna and Sam on board their boat Zuri on the weekend. Jack reports that amongst all the TGFC boats fishing, about 10 fish were tagged all up. Thanks to Jack for the great report and photo!

“We headed out Friday in relatively calm conditions, which was a nice change, to the northern grounds where we had lines in the water at 8:00am and had our first fished hooked up by 8:30am. The fish was a solid little fish around 35-37kg (80lbs), hooked on a pusher in about 25m of water, it put on pretty spectacular show on 8kg before finally being tagged 50 mins later. The next bite didn’t come till around lunch when we hooked up a nice little fish around 10kg, which saved all its energy for near the boat cartwheeling all around the joint which gave us a short (3min) but intense little fight before being released.

The next day we arrived back on the grounds to find both Reel Crazy and Kanahoee both fighting fish and tagging them a short while later however it wasn’t till midday until we got a shot at a nice sail around 25kg which refused to come in past the long rigger and eventually ended up eating a pitch bait about 80m behind the boat. However by the time the hook set we were well down into the backing forcing the drag to be increased which ended up with the fish breaking off and jumping around for the next couple of minutes. The consolation prize however came 15 minutes later with a little black about 5kg which was hooked tagged and released in about 2 minutes after it almost decided to join us in the boat.

In all about 10 fish where tagged from about 15 shots between the 6 boats over the Friday, Saturday,(with no fish being tagged Sunday), with all of them being little blacks between 5-15kg with a couple of exceptions and to my knowledge only the single sail being seen.”

I also heard from Scotty Coulter’s from Bite Me marlin charters in Yeppoon who is still reporting more blacks from the 10 kg models and up to the odd 40-50 kg around the banks to the north and east of north Keppel island and further east on the 40 m line.