Several more NQ billfish reports have come in in the leadup to today’s start of the 2013 Innisfail Billfish Tournament (29 boats nominated with 121 anglers and crew). With the conditions absolutely fabulous for the start of fishing, lets hope the beaky nosed creatures play ball!

On their way into Innisfail for the comp, Levante reported one black marlin release, while other boats also making their way north to Cairns for the giant black marlin season have also been enjoying the action. Peter Jenyns and Jim Stening, on board Jim’s Tsukiji released two off Cape Bowling Green on Wednesday. Pete reported that there was not much bait showing but obviously fish there with conditions glassed out all day and not another boat in sight. 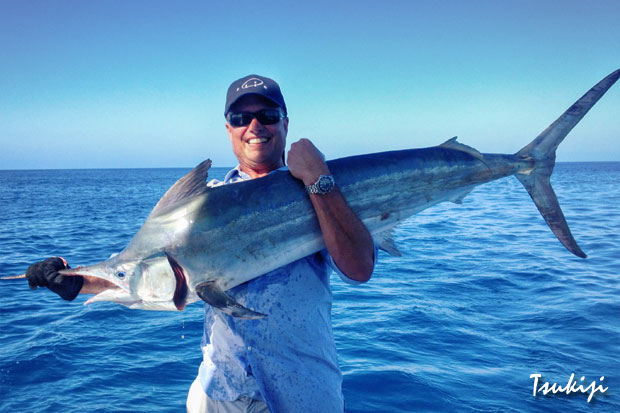 Capt. Jim Dalling on Bill Pullman’s Billy The Kid also departed Townsville heading north yesterday and released two from two on his way out wide of Palm Island in search of bait for the big fish.

Off Cairns, Shan Caddy also reported two from two on Wednesday in the 25-30 kg range on his 18ft tinnie Xtreme. Shan says that he has converted another marlin ‘virgin’ in Mark ‘Cheechy’ Verdon with the fish providing one of the most acrobatic performances he has ever seen. Shan says that both fish were within twenty minutes of each other after the current started to move after the afternoon high and were released in good health after a quick pic including this one below. 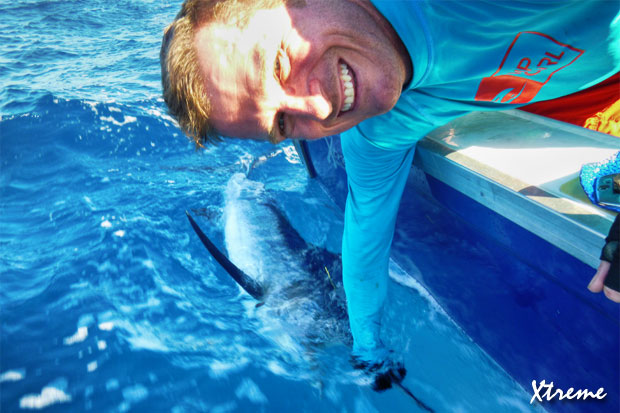 Meanwhile Capt. Kim Andersen continues to pick away on Bounty Hunter with another black marlin (and several spanish mackerel) for his anglers on Wednesday.

Meanwhile the southern migration of the smaller blacks continues with Scotty from Yeppoon’s Bite Me reporting several little blacks are around in the last 2 weeks with 5 caught over 3 boats.  Bite Me also recorded a 5-2-2 for Scotty’s Japanese client with a school of 5-6 fish coming in the spread on the second fish.

Meanwhile the Sunshine Coast is hot to trot as well with Conor Lynch recording another 4 sails on Mooloolaba GFC club boat Ymer yesterday!