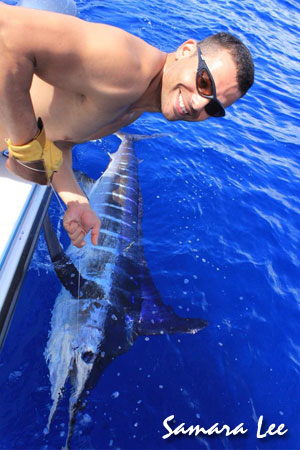 The hot fishing is spreading!  This photo was doing the rounds on FB yesterday – a great action shot from Richard Abela’s Dream Catcher of a marlin coming aboard (everyone’s okay!) But the story behind it is just as exciting.

After fishing the week off Jervis Bay, south of Sydney (it’s great spot to fish for those of you not familiar, between Sydney and Bermagui where the shelf comes in close to the coast and is also a hot spot for land based gamefishing – including marlin off the rocks!) for 1 or 2 a day, the fishing fired on the weekend.

Both Richie’s Dream Catcher and Jamie Peel’s Samara Lee recorded big numbers on Saturday (6 and 7 respectively – a mix of blacks and stripes.)  They were back out and amongst them again yesterday finishing up with a 17-17-10 for Dreamcatcher, while Jamie, Kevin and Andrew fishing together on Samara Lee went 14-14-8!

Richie is the author behind the recent run of ‘Big Fish, Small Boats’ features in BlueWater magazine and has a lot of experience fishing off the NSW coast including Jervis Bay. Read on here for a recap of a mad day on the water in 2011 for him fishing off JB for 7 solo!

Thanks Sam for the report and the great photos!

Meanwhile Capt. Tim Dean’s Calypso was still picking away at Port with another three tags yesterday and the annual Simrad All Tackle, All Species tournament has been run and won off the Gold Coast. While the fishing wasn’t red hot (and the weather not terribly cooperative) there were a few marlin around with a couple of light tackle blacks for Capt. Brett Alty’s Mistress (who I believe were overall winners?) and some heavy tackle blues out wide.  Looking forward to a report soon!