Another July 4th Blue Marlin World Cup has come and gone with team after team fishing across the globe striking out until the final minutes in the final time zone of Hawaii.  Bermuda’s hopes of a three-in-a-row victory were quashed when cease fishing arrived with no qualifying fish (over 500lbs) caught.

Then, as the 45 strong Hawaiian fleet reached midday with fishing generally quite slow, the possibility of no qualifying fish being weighed for the entire event world-wide, something that has not happened since 1997, became real.  But thankfully there was some late good fishing with less than two hours to go. Firstly, Capt. Dennis Cintas on Tropical Sun put Japanese angler Kenichi Shionoya onto a fish that was later weighed at 597 pounds.  But it wasn’t to be as they were pipped at the wire by Capt. Steve Epstein and angler Stephanie Choate on board Huntress with a winning 656 pound blue to take out the prize pool totalling $561,600!

It has already been a BIG 12 months for Stephanie who caught her first grander black marlin in Mozambique late last year. Stephanie, who is the daughter of Tim Choate, co-founder of The Billfish Foundation (TBF), released 6 blues on board Ambush with Tradition’s Capt. Tim Richardson in March during the Casa de Campo International Blue Marlin Classic to give her the Champion Female and Runner-Up Angler overall awards, and is now one of only two women to win the Blue Marlin World Cup in its 30 year history. Sue Vermillion of Kona, won the event in 1994 also from Kona aboard Pacific Blue.

While the cooler months are better known for producing some of the great winter eating fish such as snapper (and word is that the bluefin have shown up in good numbers on the NSW south coast as well), there’s always the possibility of marlin! Capt. Ross McCubbin fishing on Lucky Strike on the weekend fishing for snapper and the like proving such when marlin started to hit his snapper rigs.  They released one 70kg black on a light spin outfish and dropped another est. 80kg striped on the flathead gear! Love winter fishing on the Gold Coast!

More juvenile black marlin were reported off Townsville as well with one local boat releasing 5. 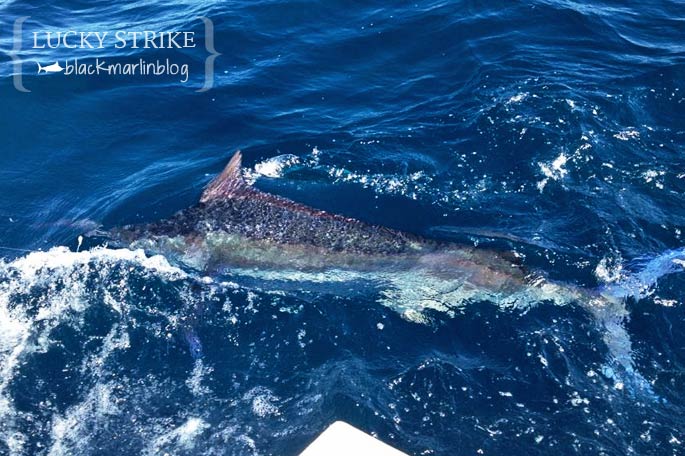