A discouraging weather forecast postponed the tournament by a week, allowing many to attend instead the Sydney Boat Show and make those tackle adjustments accordingly…

On the weekend of the rescheduled event (9-10th of August) with weather in the competitors’ favour, 25 boats headed to sea for the annual Sydney Game Fishing Club Geoff Woolley Memorial Mako Tournament. 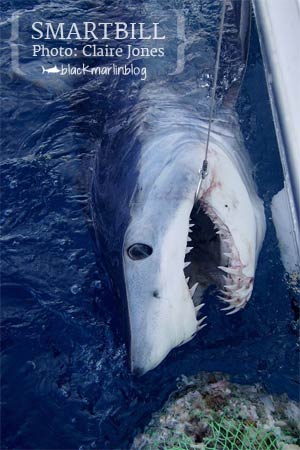 11 year old Aaron Ayad is definitely someone to watch in the years to come. Managing 9 of Smartbill’s 11 sharks over the years photo taken by Claire Jones.

The majority of the fleet drifted the lucrative hotspot of Browns Mountain which lead to SGFC boat Casey getting off to an early lead tagging 2 sharks by the first sked. The T&R pace continued steadily throughout day with team Smartbill (with juniors anglers Aaron and Jerome Ayad capitalising on a busy tagging afternoon), taking the lead at the halfway point with 7 tags.  Hot on their heals, the teams on board Casey, Ambition and Chasin’ Tail.

Sunday saw no surprises with the flotilla of boats again drifting Browns Mountain, where Glenn Wright’s Tantrum SGFC made their kick for the title, settling in and reporting tag after tag. SGFC’s Tainui found their own patch and recorded 5 sharks in a small period of the afternoon. Smartbill also made a late charge tagging 4. But it wasn’t enough with Tantrum tagging 12 for the day (with an overall tally of 14) giving them rights to the Major Trophy of Tag & Release.

There was a record number of 39 sharks on the Saturday and 43 on the Sunday tagged & released across 25 boats, 83 anglers broken (72 adults, 9 juniors and 2 small-fry anglers) with a great social but competitive atmosphere making a great weekend.SGFC would particularly like to thank all entrants and sponsors for their involvement hope to see you back next year!