Two angler interviews via Tradition’s Capt. Tim Richardson – both return guests fishing with him again in 2014! Greg Seel below who is returning to the reef for the first time in several years as well as reef regular, female angler Lydie Fayard at bottom.

Can you give us a brief description of your angling history?
In the past twenty plus years I have fished South Florida , the Florida Keys, entire Bahamas, Mexico, Costa Rica, Venezuela , Dominican Republic, Australia and flats fishing in south Texas.

When was the last time the you fished in Cairns?
2010

What was your best memory of any Cairns trip to date?
That trip in 2010.  We had 14 bites and caught 10! (here’s the link to a report mid-way through Greg’s last trip here, that was a big week on the GB!)

What are your hopes for your trip to Cairns this year?
Grander.

When can we expect to see you here this and how long are you staying who are you fishing with?
I believe October 23 fishing for twelve days with my good friend Capt. Tim Richardson!

Can you give us a brief description of your angling history?
Coming from France, I spent most of my childhood summers in the Mediterranean and really never heard of marlin / game fishing. I was introduced to angling by Pete my husband who has been fishing since he is a kid.

I first watched him rock fishing on the Sydney Northern beaches where he grew up, then he first put a line in my hands in 2002 on a trip to Thailand and later put me in the chair during our first Cairns fishing trip in 2006 and I have been **loving** it ever since!

When was the last time the you fished in Cairns?
October 2013

What was your best memory of any Cairns trip to date?
So many good memories. I would say at least one good memory every year, but some of my highlights and favorite times are: 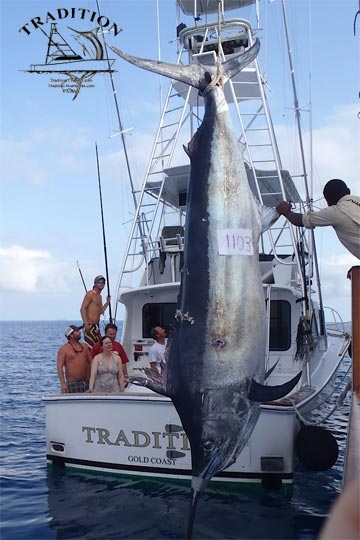 2003 First time I came to Cairns with Pete. I discovered (and snorkeled) on the Great Barrier Reef for the first time. I knew I would come back….
2006 First trip on Tradition, meeting Tim and first black marlin released. I was hooked already!!!!
2007 4 .5 hours in the chair fighting my first monster who got away….
2008 Winning the Lizard Island Champion Female Angler
2009 Pixie Pinnacle, where Pete asked for my hand while we were snorkeling in one of the most beautiful place on earth!
2011 Black marlin of a lifetime 1103lbs on 130lb tackle.

But the best one will be meeting so many fantastic people that we have made so many good friends now!

What are your hopes for your trip to Cairns this year?
Enjoying a fantastic relaxed holiday (Tim always knows how to make it happen) and if we are lucky enough, catching the right fish to get the Ladies World Record on 50lb.

When can we expect to see you here this and how long are you staying who are you fishing with?
We will be fishing with Tim Richardson on Tradition early October 2014

The Cairns season is almost upon us and it’s my job to get you all excited about that and looking forward to your daily dose of big marlin fishing reports!

For that reason I’m running a series of a 5 question interviews with anglers, skippers and crew who will be fishing the Cairns season in some way or another in 2014. Don’t forget there is still some availability (while perhaps not these exact dates still, this will give you an idea). You can contact members of the fleet directly through the BMFB Boat Directory.