Will Kozma fished with Capt. Daniel Carlson on Little Audrey out of Cooktown in late October and had some really hot fishing. Will put together this video of the trip. Enjoy!

And another Cairns video from the private fleet – Andrew Tivey’s son Ryan has put together this clip from his 2014 marlin encounters off Cairns both light and heavy tackle. Most of the fish were caught in a 540 side console Cyclone.

Some more details of the Gold Coast black and blue marlin action from Ryan Goding. Ryan reports that Gods Hands went 1-1-1 blue marlin at 300lbs, and in addition to Lucky Strike, First Priority also got 2 blues Sunday. On Monday they backed up with another. The little blacks are getting caught from Point Lookout to Tweed. Sam Lythgo and crew went 3-3-3 on Sunday. It’s all looking very good for the GCGFC light tackle comp on in January!

And even further south, a good early start for Team Marquis who recorded the first marlin of the season for Botany Bay Game fishing Club for the 3rd season running (non point score day). The fish was an 85kg striped marlin for angler Darin Redman, with crew Denver McMahon and Gerard Galbraith skipper Robert Curry. Well done guys and thanks Gerard for the report and pic! 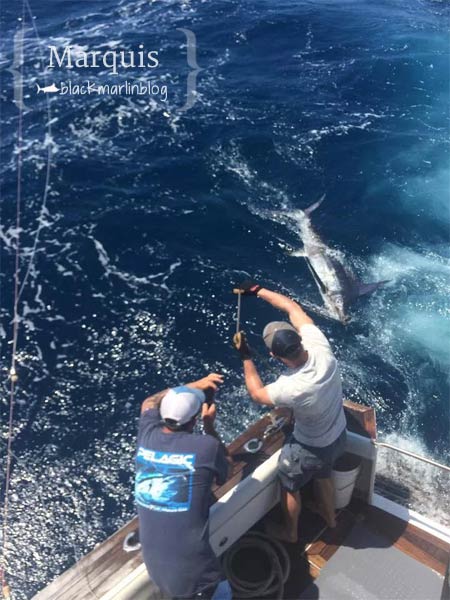