Well the results are in! You can download the full winners list here and the official report here.

By all reports, another fabulous event. The final stats were 53 black marlin tagged from a fleet of 36 boats.  Long-time Gold Coast GFC Club member Craig “Grinner” Newton and his team on Grinner was able to convert a fish on the final day to take the across the line in front with 6 tags from Ocean Instinct (who took out the Under 8m class) and Aluhra (Moreton Bay GFC) both with 5.

Several of the fish were larger models that gave anglers a tough going on the 8kg line class.  On Day 2, Hook Me Up fought an estimated 300lb-er into the night only to lose it at the back of the boat after 4 hours!

Craig Murphy was kind enough to give me an update from the comp with very good fishing not unlike what Craig remembers from 10 years ago with lots of striped marlin playing havoc with boats towing big lures and plenty to talk about at the bar in the evening! evening! While the last few years have been won by 2 or 3 fish by one boat over three days this year the Champion Boat won with 7 marlin.

Overall there were 106 billfish tagged or captured over the three days from the tournament fleet of 48 boats.  Dennis Lucardi’s 40′ Caribbean Hardaraddit won champion boat T&R with 7 marlin, most of which were caught by Dennis’ daughter Tegan Lucardi who won champion Female Angler. Runner up boat was Stewart Wensing’s Frigate with 6 marlin who also took out Most Marlin Tagged by a Trailer Boat.

Heaviest Marlin was a Blue caught on Fearless and weighed in at 167.8kg.

Craig’s boat, Dadsboat, took out Champion Boat Capture weighing a 90.7kg striped marlin on 15kg to Dr Paul Allin on the Friday (also winning them the Friday Cash Shoot Out with this fish). And they also weighed a pending Junior 15kg record 19.3kg spearfish to Craig’s son Jakob on the Saturday. On top of the two captures, they tagged another 5 striped marlin, the fishing was really good!!

The winner of the T&R section of the Friday Cash Shootout was Matt Xiberras’ boat X-Factor. 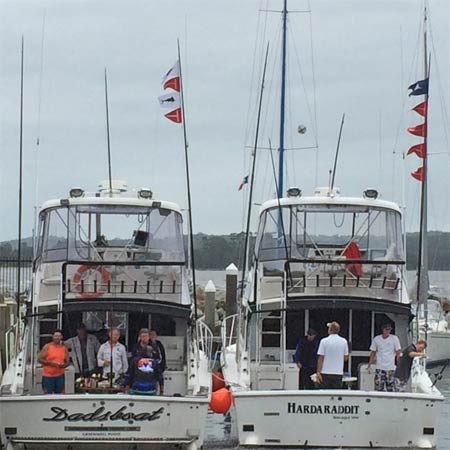 And following up from yesterday’s Golden Lure report, Steve has kindly sent me the full list of winners. There was a total of 45 black marlin, 6 blue marlin and 1 spearfish tagged.

Read on for full details:

Many more fish lost in the battle or taken for dinner.