If you’re social on Fishbook, you may of heard about some really hot fishing that happened yesterday.  If you haven’t, here are the full details:

Richie Abela has done it again.  Last year he enjoyed some great fishing off JB with stats like 17-17-10. This year he’s upped the ante again with 17 marlin from 24 strikes yesterday.  That’s 16 striped marlin and one black marlin which Richie tells me is, by all accounts, the new daily catch benchmark for the far south coast.

Fishing with Brad Dennet, Keven Agius, Chris Christou and Geoff Verity on Brad’s 2700 Noosa Cat it was definitely the best day marlin fishing all on board had seen.  Richie said that all the fish were in the 80 to 120kg and they enjoyed double and triple hookups all day. At one stage they had 12 striped marlin feeding on a baitball beside the boat, all the while they were already hooked up to multiple fish.

The day before the fished also off Narooma for 7 from 9 despite not starting the day until 11am due to the rough weather.

And as Sam tells me (not there himself until next week!) they had previously been fishing off JB again for good numbers (including a 7 from 7 4 days ago) but moved south when the current started smoking.

And the fishing is starting to fire elsewhere as well.

Nathan Brown on Head Hunter tells me the fishing is also really good to the south from Bermi down to Merrimbula. He fished yesterday for three. Expect an update soon.

Also Port Stephens is turning it on in the leadup to another tournament weekend.  Amanda is reporting another fantastic day on Zulu yesterday with a quadruple hook up, 2 x triple hook ups and 2 double hook ups of striped marlin in the 80-120kg resulting in 5 marlin tags mostly caught on 10kg line. Raffie even let Amanda have her turn on the leader (photo below). 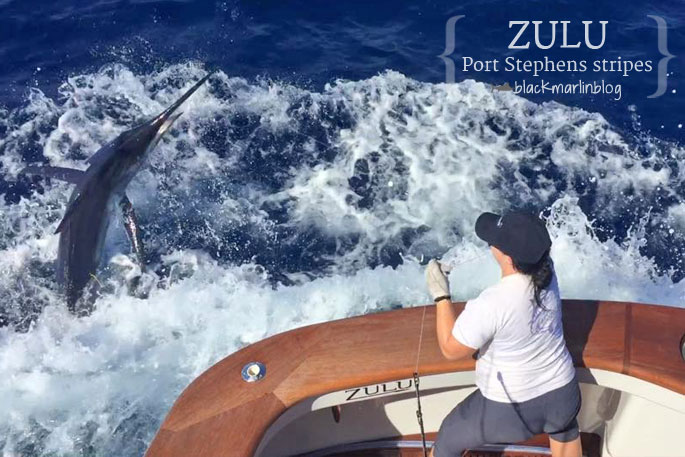