Weekend wrap up: Everywhere but Port

Read on for South Coast stripes and SEQ Blues!

Once again, NSW Interclub results are to come as the final weekend of fishing wrapped up yesterday. I heard once again the inshore black bite was a bit more quiet with the action mostly back on the carpark. If you have any reports to add, please do send along!

In the meantime, north and south have both fired again leaving plenty more fishing in the tank for the rest of the season.

Sam Muscat finally got among the action himself over the past week with a total of 15 marlin in 5 days of fishing. Sam says that he fished with cousin Jamie Peel and Andrew Demicoli. Out of Batemans Bay on their first day out they caught 4 from 6. After a few days of bad weather they decided then to go south to Bermi and went 6 from 6 Thursday, 3 from 4 Friday and 2 from 3 on Saturday.  Sam said that most boats still consistently catching one or two a day — it continues to be a great season on the south coast!

After such a great season on the little blacks in South East Queensland, there were a lot of crews hankering to get the heavy tackle out for the blues again. And with the weather agreeable, the grounds off the Gold Coast were again bumper to bumper, but seemed like plenty of fish out there too.

The Stehman’s Murphys Law was one putting away the light tackle gear after a cracker of a season, dragging out the heavy tackle for the first time this year. They fished Saturday for 4-3-3 with 2 solid 130kg blues to Andrew Morley and one solid 160kg fish to John Stehmann (with some great footage on the GoPro I hear!) They backed up again on Sunday for a 2-2-1 for first time angler Glenn Walker catching a small blue they put at 70kg. Mat said for them, the fish where really timid Sunday with some real lazy bites and all fish were caught on Larvas.

Glanville Heydenrych on Ocean Instinct was another thankful for the good weather to get out wide and found some water away from the pack. Glanville converted 1 from 1 on a feisty blue Saturday and another 2 from 3 on Sunday (photo below).

And yet another yesterday, Jesse Hill tells me that after a frustrating morning were all other boats had multiple shots yesterday while they struggled to find one, they enjoyed a hot afternoon bite. The crew on Dimitris Estate ending up with a 3-3-2 blues in the last 1.5hrs of light. Jesse said these fish all piled on with epic bites. They had to wrestle the teaser out of ones mouth to switch. Both fish were 2.6 short length (photos at top).

How good is the Goldy?! 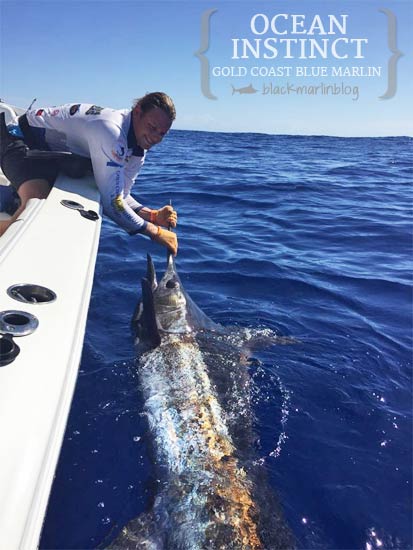