On one of the best weather weekends in the north, I’m hoping to have some more reports come in with another two light tackle tournaments kicking off this week. On KEKOA we traveled to Townsville for the Mike Carney Toyota Billfish Challenge (fishing starts Wednesday) and released two juvie blacks straight lining our way in.

(Those fishing the Innisfail comp next week might be interested to know we found by far more happening off Innisfail than to either the north or south!)

The weather looks great for both events (there I said it!) so if you’re not already entered, get in fast!

Update: Report from Peter Graham who tells me that Ray and Jo Liskus fishing on Tagzin out of Yorkeys Knob went 2-1-1 on Sunday in the paddock. Photo below: 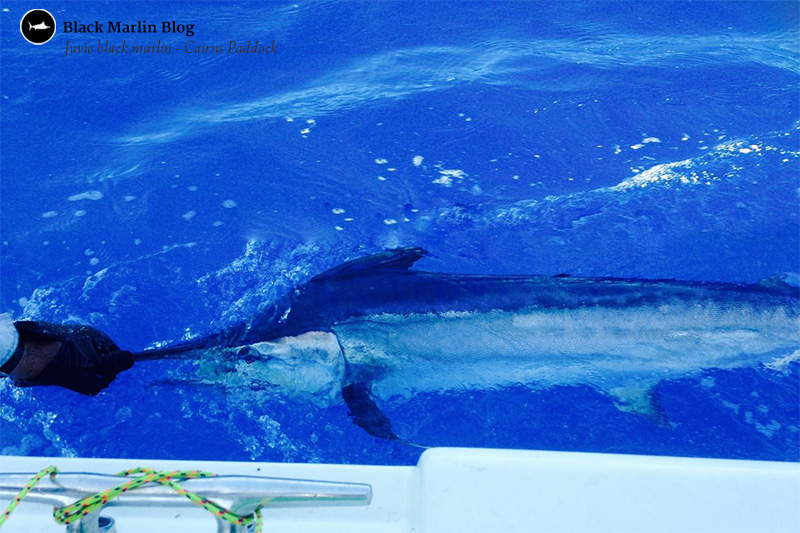 The countdown is also on for the big marlin season, and just to get you in the mood, Aydin Hussein, on deck on Kalira has sent me a great edited clip of their 2014 marlin season (at bottom) – enjoy!

Aside from the big yellowfin, a few stripies making themselves known off the Gold Coast on the weekend. Capt. Ross McCubbin on Lucky Strike was bottom fishing when he had one swim up to the back of the boat that was quickly switched and brought to the boat after about an hour’s fight.  Ross said that several more of the local fleet encountered stipes with the best going 2 from 6.  The fish were coming up in pack attacks, and feeding on the numerous sauries about. Ross also reports that Viking got a blue on Friday as well.