Day 2 of tournament fishing was quick off the mark with the first fish reported just 7 minutes after start fishing – a sailfish for local Townsville club boat, Warren Clarke’s Cool Change. Not even a minute later the second sail of the day was reported on Rod Mathiesen’s Kiama from the same bait school.  And once again, it was very much a sailfish day with 10 of the total 12 tags for the day sails, and two black marlin.

Cool Change followed up on their first fish with another in quick succession as well as a third just after the first sked to put them in front of the feild with a total of 4 tags.  While Kiama is next on 2nd with two tags.  Emma Kate added another sail to also put them on two on countback while Capt. Luke Fallon’s KEKOA reported the first marlin on the day (after jumping another off earlier) to also put them in the group on two tags.  After some bad luck with conversions on Day 1, Leigh and Peter O’Brien’s OB1 added a sail and a black marlin tag to join this group as well.

Silverback remains on one tag with Reef Rain also tagging on Day 2.

In the small boat category, Trophy added another tag to put them in front on 2 tags while Annie B were unlucky not to convert more of their fish, tagging just one to put them on the board and Slayer tagging as well likewise.

And Hardline called in a angler to weigh after briefly losing one of their anglers overboard coming back up on the teaser ;-)

There are 24 boats fishing.

After a couple of days of NW-ers, the wind comes down around from the south-east today so we’re hoping this stirs the fish up a bit.  Likewise, the fishing in Cairns (read on).

A report via Think Big‘s Paul Poulter who tells me that fishing was likewise slow for Day 1 of the Light Tackle Slam/AIBT out of Yorkey’s Knob (Cairns).  Wild Turkey reported the first fish around 2pm while Big Game and Stressless followed up to add one each – so that was a total of 3 fish for the day for a fleet of 14 boats.

Meanwhile over in the west, Capt. Chad Mills Blue Lightning billfished on the 2nd day of their recent 7 day charter to the island and tagged and released 3 sailfish (photo below). 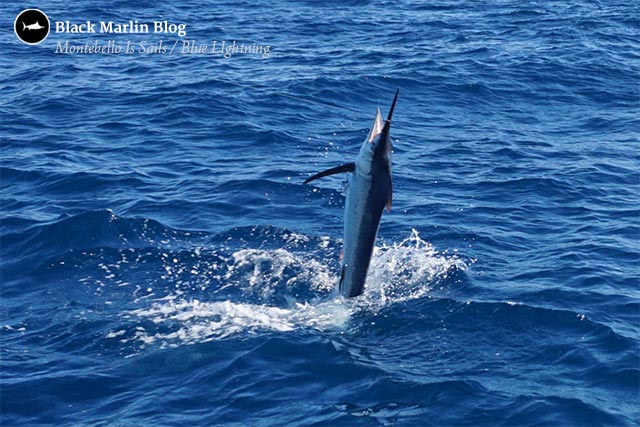