Still awesome fishing on the reef for those in the right place at the right time as more pods of fish show up.

On Monday Capt. Chris “Sharky” Miles on Levante had an awesome run of fish going 7 from 10 – absolutely awesome in anyone’s book!  Yesterday he followed up with 3 from 3. Conor (on deck) tells me the fish were up to 500lbs but they pulled the hooks on another reel nice one on Monday as well.

Down on the Bank, I hear that a bunch of dirty water moved in slowing Monday’s bite there for Zulu who tagged a small fish and Capt. Tim Richardson’s Tradition with the same.

I also had a catch up report from Capt. Danial Carlson’s Little Audrey who kicked off their season with three fish in two days of fishing, up to 450lbs, with Phil and Vicki Webster on board.

Following up from the Sunshine Coast GFC tourney over the weekend, there have been several more blues reported from the Sunshine Coast right through to the Goldy.  Darren “Mally” Malaquin sent me the photos above and below of a blue they caught on the way home from the comp (to the Goldy) – a nice fat fish with  2.85 short length for Claire Duke on Adios ( the old OB26). And thanks to the crew of Special K who were close by to capture the great shot above!

Mooloolaba GFC Club Captain Jamie Brehrens also tells me that since the comp, MGFC club members have also been on the fish and the weather has been absolutely glamour (typical I say because its been the exact opposite up here!)

Jamie fished on AJ Wright’s 35ft Bertram Bangalee on Monday going 1 from 2 on blue marlin (450lb est) and had numerous half-hearted hits from stripe marlin which were frustrating. Jamie says that most boats have been raising fish on the heavy tackle grounds. The fish have been getting caught from the Noosa Canyons to east of Moreton Island so there are good numbers out there. 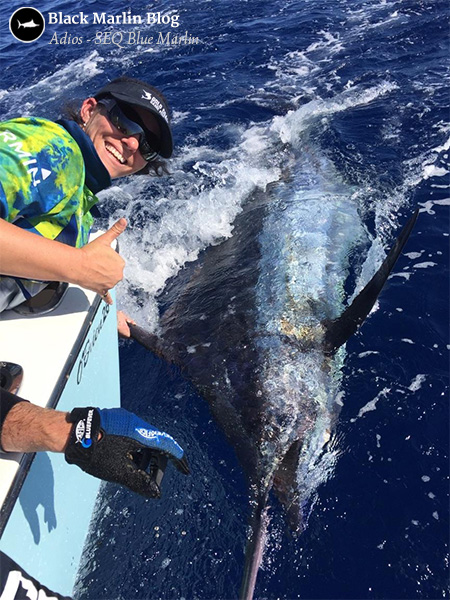