The Mooloolaba GFC Billfish Bash took place over the weekend with the Champion Boat Overall award going to the Gold Coast’s Jesse Hill and team on Reel Teaser in their first comp in the little boat (5.5m) with a black and a sail on Day 1.

Day one was a magic day weather wise. There were a total of 3 black, 2 sails and a blue tagged. Day 2 also produced good weather until lunch time when the northerly came through and made things ugly – 1 blue an 1 black tagged. Plenty of mahi mahi captured, tagged and released with a few wahoo thrown in. 23 boats fished the comp. The full list of placings to come.

Meanwhile on the Gold Coast, while the fishing was quiet for some, the crew on Jugs cleaned up with a 8-7-5 (4 blue marlin and 1 striped marlin). Matt Caelli reports that they also dropped a second stripe next to the boat and lost a real nice blue first thing in the morning. Awesome day on the water! 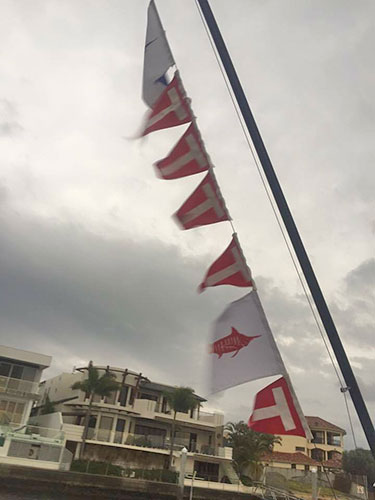