If you have a report from the weekend’s fishing send to me at info@blackmarlinfishingblog.com :-)

We had some beautiful weather up in Cairns over the weekend and out and enjoying it with some snorkeling at Fitzroy Island were the Poulter family on Think Big.

They also ventured out chasing the dolphin fish (which are plentiful at the moment!) and sails on the Sunday starting off with a nice dolphin fish for for Paul’s 77 year old mother.

An hour or so later they also picked up a huge sail for Sharon on the 10g tackle after a 1.5hr fight (2.5m short length – photo above).  Paul says they considered it a definite contender for the women’s Australian record but ultimately decided it was too close to contest so swam it and released it in a very healthy condition. The sail was caught on a revolver lure which was removed before release.

Another great turnout for the end-of-season ladies event with over 40 teams competing. 4 black marlin were tagged as well as more than 200 gamefish weighed (including a lot of dolphin fish!)

The winners were the team on Black Magic 36 (not to be confused with the other Black Magic 40) who tagged one black marlin and weighed 22 gamefish!! Rounding out the top three were the teams on Flying Fisher and Trail’s End.

Black Label were one of the first out of the blocks with an early marlin tagged by Kourtney Kersnovske (photo) to come in 5th place.

A big thanks to the lovely Leah for the results (fishing on Zulu and coming in 6th place with 13 dollies!) 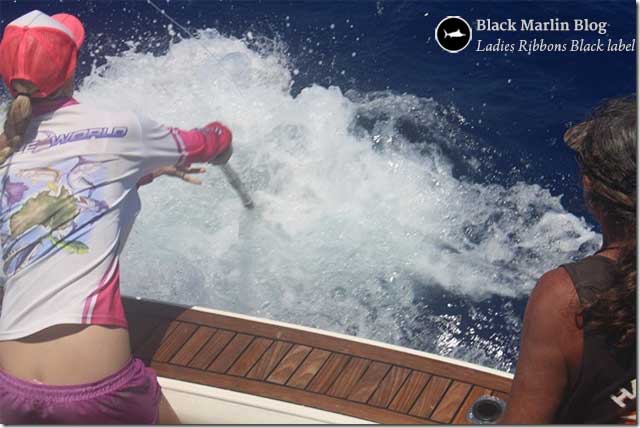